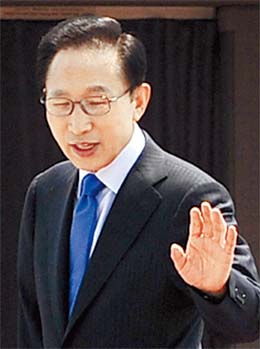 Lee left for Singapore yesterday to attend the Asian Security Summit, where he will give a keynote address focused on denuclearization of the North and the security crisis on the peninsula. Ahead of the regional security summit, also known as the Shangri-La Dialogue, Lee gave an interview with Singapore’s Straits Times, elaborating his tough stance on the North.

“We cannot expect any progress at the six-party talks, if it is held when North Korea does not have any intention to give up its nuclear ambition and is not ready [to repent] over its surprise military provocation in our waters,” Lee was quoted as saying by the newspaper. Lee also said South Korea will not provide assistance to the North as if it is “business as usual.”

Although Seoul formally accused Pyongyang of torpedoing its warship the Cheonan in March, North Korea denied the charge. According to the newspaper, Lee emphasized the importance of the United Nations Security Council’s censures on Pyongyang to bring about changes in the reclusive communist country. “Only through this kind of firm action will the international community be able to change North Korea,” Lee was quoted as saying. In addition to some unilateral punishments on the North, South Korea is waging a diplomatic campaign to hold Pyongyang responsible for the Cheonan’s sinking. South Korea was scheduled to submit a letter to the UN Security Council last night to condemn the provocation.

According to government officials, the letter was to be sent to Mexico, which assumed the current presidency of the UN Security Council. In the letter, Seoul will urge the Security Council to discuss the sinking of its ship because the North’s armed provocation is a threat to international peace and stability. The letter will be reviewed by members of the council. A Security Council resolution must have the votes of all five permanent members including China, which has shown a lukewarm attitude to Seoul’s campaign.

Responding to Seoul’s diplomatic effort, a North Korean Foreign Ministry spokesman made more threats yesterday. Claiming that the international probe that identified the North as a culprit was unfair and one-sided, the North said a Security Council discussion based on that investigation would be an attempt to frame Pyongyang.

“The United States and the UN Security Council will have nothing to say even if we will take an extra tough response, just like the last time,” the spokesman said.

The North’s stance appeared to indicate the possibility that the country will stage an elevated provocation, such as a nuclear test or a long-range missile firing, if the UN Security Council tries to punish it. South Korea and the United States had planned a joint naval drill next week in response to the North’s provocation, but Seoul officials said yesterday the exercise will be postponed by two to three weeks. “The joint naval drill, scheduled to start early next week, was delayed to some time after mid-June, due to the need for further preparations by the U.S. side,” Deputy Defense Minister Chang Kwang-il told reporters in Singapore, where he traveled to attend the Shangri-La Dialogue.

On the sidelines of the security talks, South Korea’s Defense Minister Kim Tae-young and U.S. Defense Secretary Robert Gates are scheduled to have a meeting to discuss the two countries’ joint response to the North’s torpedo attack and their defense posture.