Seoul schools going back to the chalkboard

Seoul schools going back to the chalkboard 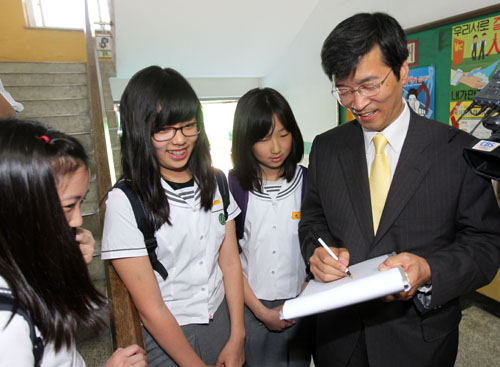 Newly elected Seoul education superintendent Kwak No-hyun, right, signs autographs at the request of students yesterday in Kongjin Middle School in Gangseo District. Kwak made a visit to listen to what teachers and students have to say about current education policies. [YONHAP]

The first official public outing for Kwak No-hyun, elected Seoul’s education superintendent this Wednesday, was at a small middle school in Gayang-dong, Seoul.

“Are your classes boring?” Kwak asked a 15-year-old in a small classroom with around 10 students at Kongjin Middle School yesterday. The girl answered, “I just want to sleep.”

Kwak replied that if she was in a more interactive class, she wouldn’t be so drowsy.

Kongjin Middle School is designated an “academic advancement focus” school because it has a high percentage of students with low grades and around 60 percent of its students get free lunches due to their modest family backgrounds.

“I wanted to find out what is needed for students from poor families to be able to experience the best quality public education possible,” said Kwak.

A major shift in direction is expected to come to the education sector in the metropolitan area after liberal candidates won top educator spots in a surprise victory in this week’s elections.

At the center of the change is Kwak, whose progressive tendencies are forecast to clash with the education policies of President Lee Myung-bak’s administration. Throughout his campaign, Kwak argued that the current policies are too competition-oriented and emphasized the need for education that builds students’ character and creativity on the whole.

At Kongjin, principal Yun Heung-joong said, “Students who can’t afford meals tend to lack in self confidence,” adding that his school desperately needs the “free meal” policy to go into effect.

Liberal candidates for the education posts, including Kwak, pledged to offer free meals to all elementary and middle-school students nationwide, while conservatives said it would cost too much and that feeding children from high-income brackets is unnecessary.

Under the program, education offices identify schools with many students from poor families and give the schools around 200 million won ($166,417) yearly. They also assign schoolteachers with top reputations. The students receive free meals and after-school tutorials. In these schools, the student-teacher ratio is around 25 to 1 instead of the current average for public schools, which is 35 to 1.

At present, 33 schools in Gyeonggi are “innovation schools,” and Kwak pledged that he would bring the program to 300 schools in Seoul.

“I plan to designate schools that have a tough environment for education at the present, but whose teachers and parents have a strong will to change,” said Kwak.

Meanwhile, some experts worry that this project might overlap with similar programs of the Seoul education office. Others worry whether the teachers will invest more of their time for these programs.

“I am worried about how much more time I will have to invest in doing other things besides my regular teaching,” said Park, a teacher at Kongjin Middle School.