For those of you who have lived in Seoul for a while, you may have already discovered that there are many areas of Seoul where a particular product is sold in a high density, thus creating streets with certain reputations. Photographers know if you’re in the market for high quality photography equipment it’s either Namdaemun’s Camera Row (for the latest digital cameras) or Chung-muro’s Camera Street (for classic film cameras). Near Chungmuro, you can also find a row of motorcycle shops, deemed “Motorcycle Street.” Going to Jongno will give you a chance to visit “Jewelry Store Row,” with stores hawking gold, diamonds and pearls up and down both side of the street between Jonggak Station and Jongno 3-ga Station. Printer’s Row, Baking Street, the list goes on and on.

What you may not know, however, is that there are also such specialized areas for food. Actually, these food streets are sometimes quite small and often hidden, so some of them are even unknown to Koreans. 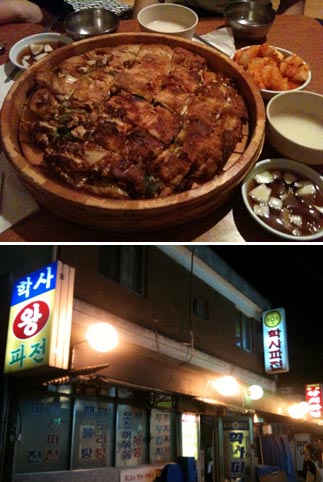 At Nakseo Pajeon, the jeon is almost as thick as a Chicago thick-crust pizza. Each jeon is stuffed full of kimchi and seafood and pan-fried to perfection with a crispy edge.

Jeon, sometimes called buchimgae, is a popular food among both Koreans and expats. Usually called a Korean pancake, jeon uses a wheat flour and egg batter and can be made with a variety of other ingredients such as onions (for pajeon), kimchi (kimchijeon), potato (gamjajeon), or even pieces of seafood (haemuljeon) before it is fried in a skillet, similar to a pancake. Whatever the ingredients, jeon is typically served with a dipping sauce, a mixture of soy sauce, sesame oil, vinegar, and red pepper flakes. Jeon is also similar to another popular dish, bindaetteok, which is thicker and made with ground mung beans.

Jeon is sometimes eaten as a side dish to a traditional Korean meal but it is also often eaten as an accompaniment to traditional Korean liquors, in particular makgeolli and dongdongju, as a snack or drinking food. One small street that is known for its jeon is a small alley near Hoegi Station, a cramped alleyway with tiny, worn-looking pajeon restaurants lining both sides of the street.

On the suggestion of a friend who lives in the neighborhood, we selected Nakseo Pajeon, literally “doodling pajeon,” since the walls of the small shop are covered in scribbles and drawings of past patrons of the past 28 years. Here, the jeon is thick, almost as thick as a Chicago thick-crust pizza. Each jeon is stuffed full of kimchi and seafood, pan-fried to perfection with a crispy edge. We ordered the modeumjeon (7,000 won), or the jeon with everything, and makgeolli and were not disappointed.

Go to Hoegi Station (line No. 1, exit 1) towards Kyunghee University. Turn left into the small alley when you see an SK Telecom store. 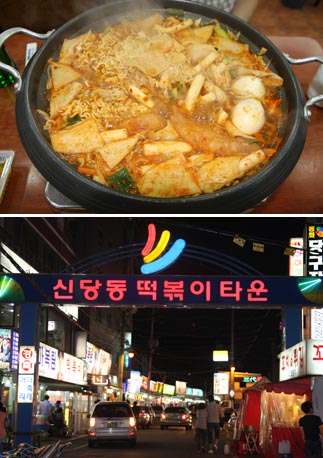 In Sindang Tteokbokki Town, right, tteokbokki isn’t just a snack, it’s a meal and is made with a variety of ingredients not found at most streetside tteokbokki stands. By Shannon Heit

Sindang-dong has long been famous for its tteokbokki, or pan-fried spicy rice cakes. Ubiquitous street food, it might seem pointless to go somewhere specifically for tteokbokki when you can find it nearly everywhere in Seoul, but Sindang Tteokbokki isn’t a snack, it’s a meal.

This street has become so famous for its rice cakes that the official street name is actually Tteokbokki Road and both ends of the street are bookended with arches that welcome you to Tteokbokki Town. Between the arches, everything is tteokbokki or bust. There are a few famous restaurants in Tteokbokki Town and each restaurant boasts its television appearances on the walls. But the most famous of these restaurants is certainly Ma Bok-Rim Halmoni’s Sindang-dong Tteokbokki, the oldest restaurant on the block. You may not know it, but tteokbokki as we know it today is a relatively new food and Ma halmoni, or Grandma Ma, is actually credited as the person who created tteokbokki in its current, spicy conception. Before Grandma Ma started selling the spicy version in 1953, tteokbokki was a mild-flavored food served with meat and eggs. The tale goes that Grandma Ma was eating the rice cake when it accidentally fell into her jjajangmyeon sauce (black bean sauce) and after tasting it, she realized it might taste even better mixed with gochujang (red pepper paste).

So what makes Sindang-dong Tteokbokki so special? Grandma Ma says it’s her secret recipe, which she’s only just now told her daughter-in-laws after she retired, but go into any of the other dozen or so shops that line Tteokbokki Town and you’ll see a similar formula. Instead of the simple combination of tteokbokki and odaeng (fishcake) that you typically see at street food stalls, Sindang-dong Tteokbokki restaurants offer huge pans of rice cake, fishcake, ramen noodles, jjolmyeon (spicy cold noodles with vegetables), egg and dumplings to be cooked at your table. We went to Samdae Halmeonae, another popular establishment, where a two-person portion will cost you a measly 10,000 won and if you’re feeling adventurous, most stores along the street also offer dalkbal (chicken feet) as a specialty.

Go to Sindang Station (line No. 2 or 6, exit 8) and turn left immediately. You should be able to see the large, bright sign for Tteokbokki Town after just a minute or two.

Twigim, or Korean style tempura, is often sold on the street and made with shrimp, octopus, sweet potato, dumplings, and seaweed and noodle rolls.

Tucked away in an alley near Gongdeok Ogeori, this area is also known for jokbal (pig’s feet) and bindaetteok. In fact, although the most popular restaurant’s name is Won-jo Mapo Halmoni Bindaetteok, the endless assortment of twigim will probably be the thing that impresses you the most. The restaurant, which has been around for 25 years, has been featured on a variety of TV broadcasts and is a neighborhood institution.

Here, you can easily find over 20 varieties of twigim and jeon, ranging from the usual suspects to more interesting combinations such as whole boiled eggs, crab with onion and spam (typical during Korean holidays), and hot peppers. You can pick and choose the twigim that you want to eat before going into the restaurant, or for the indecisive, the restaurant offers a modeum-twigim or modeumjeon option, which gives you a representative selection (both are 7,000 won for the small or 14,000 won for the large portion). There’s even a mixed option that gives you both twigim and jeon (14,000 won). As with jeon, most people like to pair their twigim with a bottle of makgeolli.

Go to Gongdeok Station (line No. 5, exit 5) and walk straight about 100 meters. To make sure you’re going the right direction, you should walk past a Qook and Show store and a Blue Club Hair Shop.

Naengmyeon, or cold noodles, is a Korean dish that originated in North Korea.

Go to Euljiro 4-ga Station (line No. 2, exit 8) and walk towards the Jung District Office intersection where you’ll turn left and walk about 50 meters before you see the first naengmyeon shop.

Since this area originally housed many slaughterhouses and butcher shops, it has become synonymous with the freshest meat in the city. Although the slaughterhouses are no longer there, due to complaints from local residents, the butcher shops are still intact, providing the cuts for up to 70 percent of the meat bought and sold in the capital region. Around the area, more than a dozen saeng- gogi (fresh meat) barbeque restaurants have sprouted up, making it a famous place to get the freshest cuts of meat for your table.

Go to Majang Station (line No. 5, exit 2) and go straight until you see Hyundai Oil Bank gas station and turn left. Walk straight about 5 minutes until you see the entrance to the Majang-dong Meat Market.