HOW THE WAR BEGAN
Critical defense at the Nakdong River

Last week, General Paik reunited with members of the 1st Division and they received valuable maps and artillery from the American and UN troops. 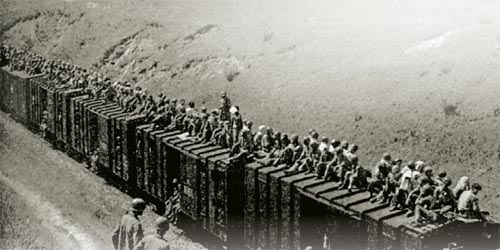 In July 1950, the U.S. Army started to send in a large number of troops to help Gen. Walton Harris Walker of the U.S. 8th Army in his efforts to defend the Nakdong line. American troops who had arrived through Busan take a break during their train ride to the Nakdong River area. Provided by the U.S. Army


My first joint operation with the Americans took place over two days starting on July 23 in Sangju, North Gyeongsang, when we attacked the main forces of the incoming enemy’s Infantry 15th Division. It did not come about intentionally, but the joint operation with the 17th Regiment and the U.S. Infantry 24th Regiment was considered a big success. It was also a valuable experience from the standpoint that having participated in battle with our ally, I was now instilled with the confidence that with the support of the American troops, we could effectively fight off our enemies.

At the conclusion of the joint operation on July 25, I received a new order from the commanding Gen. Kim Hong-il. We were to regroup in Sangju Township and advance to Hamchang Township. The U.S. Infantry 24th Regiment would hold the Sangju line as we departed.

However, the U.S. Infantry 24th Regiment did not show up on time on July 25, which forced us to delay our departure another day. That angered our commanding general and left me with no other option but to speed up our march.

We arrived in Sanju Township in the afternoon of July 26, when we were greeted by the ROK 20th Regiment led by Col. Park Ki-byung and a defense corps made up of students. After joining forces, we now had over 7,000 troops. Soldiers without firearms were provided with M1 Garand and Carbine semiautomatic rifles.

Although we had made significant strides since the early stages of the war, we were now taking on the shape of what an infantry division ought to look like. After marching approximately 300 kilometers (186 miles) in the span of about a month, we were finally coming into our own.

At this point, I also got some good news. On July 27, we got a visit from Minister of National Defense Shin Sung-mo and Chief of Staff Jung Il-kwon at the division forward command post set up at the local post office in Sangju.

I addressed the two by briefing them on the current state of the ROK 1st Division and told them we had built up enough strength to participate in full-fledged battles.

The reaction that followed was a bit unexpected. Shin began by extending his hand and said in a loud boisterous manner, “You’ve done a fine job in less than favorable circumstances. We are counting on you to do even better from this point forward. We’re promoting you to general.”

He moved forward and pinned a star on my right shoulder. The Chief of Staff then stepped up and pinned another star on the opposite shoulder. I was now a brigadier general in charge of the brigade instead of a colonel commanding a division.

More good news followed. We had gained possession of the ROK Artillery 1st Battalion. While we were making our hasty retreat, the artillery battalion had been receiving training. The battalion was fitted with new 105-millimeter artillery howitzers. 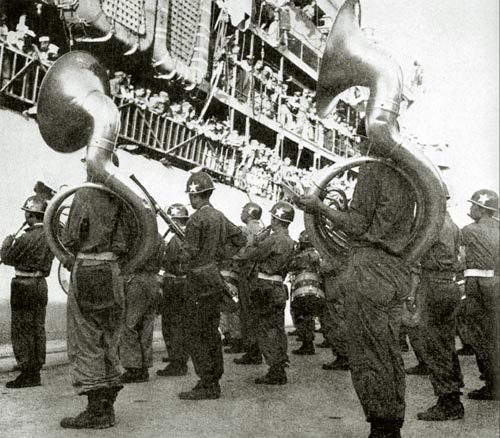 The number of U.S. troops increased as the situation at the Nakdong River got serious. The ROK military band welcomes the U.S. Marines arriving in Busan port at the end of July 1950.

The regiment had been pushed off the line in Kaesong and retreated south along the Yellow Sea shore on fishing vessels to Gunsan, North Jeolla. They eventually found their way to Sangju, where the ROK 1st Division was posted. The reunion with the 12th Regiment conjured up the emotions I had felt back at Jochiwon Station upon reuniting with my men.

To this day, I remember the monthlong retreat south from the Imjin River to Sanju at the start of the war as the most painful experience of the war. I cannot express in words the pain I felt at the time. Although I was promoted to brigadier general in Sanju, I had not achieved much other than stalling for time as we waited for reinforcements. Everything else was a fight for survival.

In leading a group of men who in some cases lacked the basic necessities such as firearms and artillery fire, I was reduced to planning small hit-and-run missions. Other than that my biggest task was to find routes for our retreat south and to manage the troops who had found their way back to my division.

Perhaps it was only natural for the men to be exposed to fatigue and hunger. Every opportunity they got, men found a place along the mountain trails or roads and caught some much needed shut-eye.

The rainfall during the summer monsoon season was a welcomed change of pace for the hot and tired troops. The men could also endure the mosquito and insect bites but we saw no end to our sense of frustration.

We were constantly bombarded with thoughts of whether we were capable of winning battles against our enemy, which were awaiting us at the end of the trek. On numerous occasions we were overcome with anxiety about our uncertain future.

For a group that lacked the basic necessities to effectively carry out combat, anxiety was dangerous since it could easily lead to a sense of hopelessness and low morale.

However, with our monthlong retreat now over, we were looking forward to better times. Due to the spirited efforts of the ROK and American troops during the dire moments of the early stages of the war, we had time to upgrade our troops.

Gen. Walton Harris Walker, the commanding officer of the U.S. 8th Army arrived in Korea on Aug. 1, 1950, and ordered the allied forces to retreat to the Nakdong line. U.S. intelligence had finally located the whereabouts of the North Korean 6th Division, which had gone off radar since early July.

A total of two North Korean Divisions passed through the Jeolla region and made their offensive in the west Gyeongsang region. The North Korean 6th Division occupied Geochang and Jinju and was now attacking Masan.

Due to the strong support from the Americans, the ROK 1st Division was able to cross the Nakdong River on Aug. 1 and go into Sunsan County, North Gyeongsang. My 7,000 men and I had the important task of defending the 41-kilometer Nak-dong line. It was our duty to prevent enemy incursions into the eastern part of the Nakdong River which ran from the northern region of the peninsula to the south.

Pinned to the southeastern corner of the peninsula, and having lost the battles at the Imjin River and Han River, the failure to hold the Nakdong River would bring the war to an end.

The enemy put on an aggressive front with the goal of winning the war by Aug. 15 - National Liberation Day.

In an overall effort to speed up battle, we noticed the North Korean troops attempt to lay the foundation for a bridge by placing sand bags in the river after sunset. North Korea also placed volunteer troops, which included men captured from Seoul and other southern regions, on the front lines to take enemy fire. Having no other choice but to fire into the line of volunteer troops was disheartening and I still remember the feeling vividly.

With an army numbering three times that of the South’s and 10 times the fire power, North Korea put on a strong offensive. We struggled time and again and were barely able to defend the Nak-dong line. U.S. Air Force bombing missions during the day made our jobs a whole lot easier but we had no other viable options but to struggle to hold the line after sunset.

Meanwhile, due to the stress of the battle, my symptoms of malaria acted up again. The daytime chill made it difficult for me to carry out my duties. I needed some rest and finally took refuge at the home of Kim Dong-seok, the founder and principal of Osang Middle School, which was in the area. One day, I was resting with the door to my room open when I was interrupted by the meek voice of a tall boy with strong features who looked to be a high school student.

“General, I’ve brought you some gruel. I’m the son the household. My mother heard that you were not well and she has cooked you some food,” said the young man.

The young man, who was in his second year of high school, was Kim Yoon-hwan. When Kim came of age, he volunteered to serve under my command and I happily obliged, sending him to the artillery unit of the ROK 1st Division. He would go on to become a lawmaker and a prominent politician with a reputation for helping others to the presidency.

Many years later, in 1985, I got an unexpected call from Kim and I would keep in touch with him over the years. Although he regularly appeared on television as a busy politician, the image of the polite and gentle high school student was always pervasive in my mind.

Regrettably, Kim passed away suddenly in 2003. When I heard the news, the first image that entered my mind was that of the quiet young man who stood in the doorway of my room with a tray of food.