Greeks ready to give it 100 percent effort

Greeks ready to give it 100 percent effort 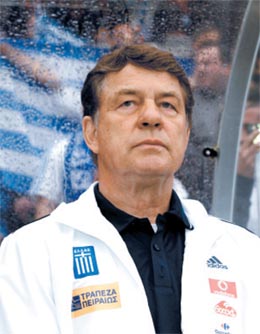 ATHENS - Greece coach Otto Rehhagel said Saturday that for his team to have success in the World Cup it must put in a 100 percent effort.

“For us to do well, we must have 100 percent concentration and effort,” the 71-year-old German coach who guided Greece to the Euro 2004 title said as the team prepared to depart for South Africa.

Haunting the Greeks, however, is their disastrous first and only other appearance in the World Cup in 1994, when the team not only lost all three of their matches, but even failed to score.

“A lot of things have changed since then. Like every previous match, nothing has to do with the next match,” Rehhagel said when asked to compare the Greek World Cup team of 1994 with today’s.

The Greek team spent their last day in Athens before leaving for Durban and final training sessions appearing at events hosted by sponsors. Rehhagel also had the team go through a final workout Saturday morning.

“South Korea is an excellent team and as in every World Cup match, you must give a 100 percent effort to accomplish a good result,” Rehhagel said of his first opponent in Group B.

The Greeks are also scheduled to face Nigeria and Argentina in their group.

“We must play like we did in the qualification playoff match against Ukraine [a 1-0 away win by Greece that enabled them to qualify for the World Cup]. We have to be ready both physically and mentally. We are going to the World Cup with great confidence,” said Celtic striker Georgios Samaras.

Olympiakos Piraeus defender Vassilis Torosidis said: “We are ready to cope with the difficulties. Our main asset is consistency. The only thing that scares me is stress.”

“The issue is for us to have balance and to give everything in each match. We must be focused,” said Olympiakos defender Avraam Papadopoulos.

The only headache for Rehhagel is Bologna defender Vangelis Moras, who has a leg injury and is considered doubtful for the first match against South Korea. Eintracht Frankfurt striker Fanis Gekas went through a light workout Saturday but is expected to be ready for normal training when the Greeks start their practice sessions in South Africa.

Some 150 fans braved the rain and turned out for the open last training sessions for the team on Greek soil.