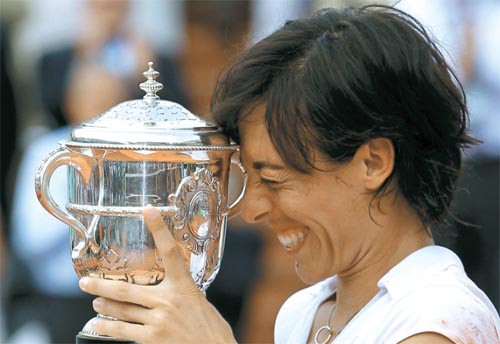 Francesca Schiavone of Italy poses with her trophy after winning the women’s final against Samantha Stosur of Australia at the French Open tennis tournament. [REUTERS/YONHAP]

PARIS - With the performance of a lifetime, Francesca Schiavone became the first Italian woman to win a Grand Slam title by beating Samantha Stosur in the final of the French Open on Saturday, 6-4, 7-6 (2).

Schiavone threw uppercuts, put her fists to her face, skipped about the court and laughed at the crowd’s enthusiasm. And then, when she had won the final, she really let her emotions show. The tour veteran rallied from a 4-1 deficit in the second set and took the clinching tiebreaker with a succession of brilliant shots.

On winning, Schiavone fell onto her back, then rolled over and kissed the clay. She rose covered with dirt, hugged Stosur and broke into a champion’s grin, then trotted over to the wall behind the baseline and climbed it for a group hug with her supporters.

“You give me a great trophy,” Schiavone told her. “I feel amazing.”

At 29, Schiavone became the oldest woman to win her first Grand Slam title since Ann Jones won Wimbledon in 1969 at age 30. She is the first Italian Grand Slam champion since Adriano Panatta won the French Open men’s title in 1976.

Schiavone was seeded 17th. The only other time the title was won by a woman not seeded in the top 10 was in 1933. The women’s final was the best in nearly a decade at Roland Garros, and the quality of play climaxed in the tiebreaker. Schiavone reached match point by hitting four consecutive winners, the last a lunging backhand volley, and she exulted after every one. She then hit a backhand into the corner with so much spin it deflected off Stosur’s racket, and the real celebration began.

Both players were first-time Grand Slam finalists, but Schiavone certainly looked relaxed - during one changeover break she laughed at her chanting fans.

The No. 5-seeded Stosur beat four-time champion Justine Henin, top-ranked Serena Williams and former No. 1 Jelena Jankovic en route to the final, but the Australian’s forehand lacked the bite it had in those matches. Much of that had to do with Schiavone, who played dogged defense and used her stylish mix of spins to keep Stosur at bay.

The clay was fast on a sunny afternoon, and Stosur’s serves topped out at 123 mph. But Schiavone boldly launched her body into them and did damage with her returns.

“They both played not a bad match, but Sam was a little bit more introverted,” said Stosur’s coach, David Taylor. “Full credit to Francesca. She had nothing to lose, and she played a great tactical match and a great mental match.”

Each player served well and whacked more than two dozen winners, and both sets swung on a few points. Both held without facing a break point until the ninth game, when Stosur fell behind love-40. She saved two break points but then double-faulted for the first time.

Schiavone fell behind love-30 in the next game but rallied, hitting four winners to hold and seal the set. Stosur walked off screaming angrily at herself. Stosur saved two break points and held to go ahead 2-1 in the second set, then broke for the first time en route to a 4-1 lead. Schiavone rallied, losing only four points in the next three games and taking advantage of several Stosur errors to reach 4-all. Both held to reach the exciting tiebreaker.