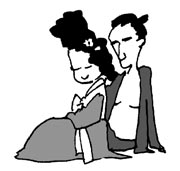 “The Servant,” a new movie released on Wednesday, is based on the rather outrageous proposition that Chunhyang, the heroine of the popular Korean folktale “The Story of Chunhyang,” falls in love with Bang-ja, the servant of Lee Myong-ryong, and not with the master himself. In the movie, the hero is not Lee, who abandons Chunhyang and leaves for Seoul, but Bang-ja, who stays by her side. Because of the way the film distorts the story, a contrary version of the story is passed down.

The fun of reversing a well-known story has a long tradition. The Story of Chunhyang, itself, is a reversal of sorts. The idea that Chunhyang, the daughter of a gisaeng courtesan, could be the lawful wife of a royal emissary who won first place in a state examination - in a society with a rigid caste system - is somewhat outrageous.

But the Chunhyang legend, which originates from Bakseok Pass in the Namwon region, says that Chunhyang, who had a secret crush on the young master Lee, was not a beauty but an ugly woman. Although Lee is tricked into sleeping with Chunhyang by her mother Wolmae, he flees to Seoul as soon as he sees Chunhyang’s real face. Chunhyang, out of indignation, commits suicide, and her vengeful spirit kills the newly-appointed magistrates of Namwon one after another. As a result, the royal court decides to appoint Lee, who had repeatedly failed to pass his state exam, as the magistrate of Namwon in order to console Chunhyang’s spirit. To further soothe her, Lee writes a song, “The Song of the Faithful Woman Chunhyang.”

This legend is the origin of The Story of Chunhyang. It tells us that Bakseok Pass, which is also part of the traditionally sung pansori version of the story, was originally Baksaek - or Ugly Woman - Pass.

As with these versions of the Chunhyang story, the reversal as a device has become a trend in popular culture today.

In addition to The Servant, which is a hit at the box office, the recently-ended KBS-2 drama “Cinderella’s Elder Sister,” achieved great success by replacing the heroine with the stepmother’s daughter.

“Robin Hood,” the opening film at the Cannes International Film Festival earlier this year, is based on the nonsensical premise that the legendary outlaw Robin Hood, who went around Sherwood Forest on the outskirts of England, gathered the lords of England to force the king to sign the Magna Carta, the charter that laid the foundation of constitutional government in England.

What does the reversal, so popular in the world of film, signify for us in real life?

Perhaps it tells us that if a protagonist thinks he is the only person playing the leading role, it is a miscalculation.

For those who won the local elections on Wednesday by the slightest of margins, that may not be such a far-fetched tale.