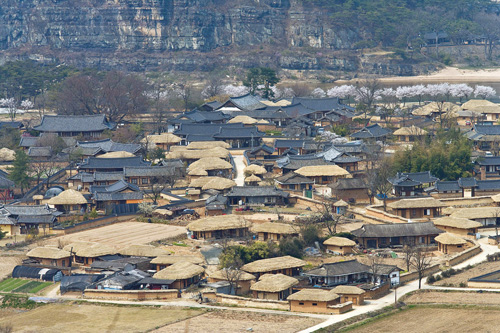 The body charged with evaluating Korea’s application, the International Council on Monuments and Sites, requested additional information about the proposal, but that doesn’t mean the villages cannot eventually be listed.

Icomos is a nongovernmental organization dedicated to the conservation of the world’s historic places. It is one of three organizations that evaluates sites nominated for inscription to the Unesco list. After Icomos evaluates an application, it makes a recommendation to Unesco based on four categories: inscription to the list; rejection; deferral to another meeting; and referral for additional information.

When an application is recommended for referral, the applicant is given recommendations for improving its application and time to implement the changes. The application may then be resubmitted to the council for consideration at the subsequent annual session, according to an official with the government agency.

Although the regular procedure would delay the application for a year, the CHA says it will remedy the issues identified by Icomos and resubmit its application for the villages to the 34th session of the Unesco World Heritage Centre, scheduled for late July in Brazil.

As in the original application, the two villages will be submitted for consideration as one site, the “Historic Villages of Korea: Hahoe and Yangdong.”

Icomos recommended that the site be managed under a single regulatory body because it was concerned that the separate local governments would apply different management policies for the villages, according to the Cultural Heritage Administration.

However, the government body believes the prospect of the upcoming review is bright, given that it has already adopted the measures suggested by Icomos.

It launched a historic village preservation committee in April under the South Gyeongsang Provincial Government based on the judgment that the two villages needed a uniform regulatory body. The committee was formed three months after Korea submitted its application to have the villages inscribed to the list.

Formed during the Joseon Dynasty (1392-1910), the villages maintain buildings and spaces that are unique to the clan society of the time, which was based in Confucianism. Private houses designed in the traditional style remain intact in the two villages, along with temples, libraries and village schools. In addition to these ancient structures, the villages maintain historical documents and folk arts that have been passed down for generations. One of the most well-known folk arts is the Hahoe mask dance drama, a shamanist rite, and the accompanying masks. Yangdong village has over 160 tile- and thatched-roof homes, 54 of which are over 200 years old.

The architectural artifacts “harmonize well with the environment,” the heritage administration said.

Meanwhile, Gwangneung Forest, a well-preserved hardwood forest in central Korea, was listed as a world biosphere reserve by Unesco last Thursday. The 25,000-hectare forest, which stretches over three major cities in Gyeonggi Province, has deciduous hardwood trees that are more than 500 years old, as well as farmlands and private forests. The Royal Tombs of the Joseon Dynasty, which were designated as Unesco World Heritage Sites last year, are also located within the zone, along with the Korea National Arboretum.