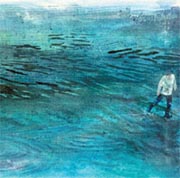 The people are drawn in bold strokes, often glowing amid their soft pastel surroundings. In this way, he shows his subjects’ essence, even as their bodies melt into the indistinct background.

Kirschner tries to emphasize details in his paintings by using the effects of 19th century Romanticism. Although he sometimes incorporates digital effects into his works in order to fully convey his message of the digitized world, his focus still remains in actual painting. Due to his brush techniques and wide use of colors, his paintings seem almost surreal. 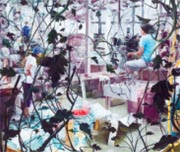 As an artist who has focused on Korean historical sites such as the Sungnyemun, Pyongyang, Seoul Square and more in order to shed a new light on them, Moon combines media, installations and paintings to bring these places to life.

In this exhibit, Moon incorporates the greenhouses of the Defense Security Command and Changgyeong Palace to introduce viewers to an unfamiliar piece of Korean history.

A place which blocks out light, temperature and precipitation, greenhouses become a metaphor for the artist to express the society in which we live.

Moon sees the greenhouse as a protective layer that separates individuals from an artificially-made society and allows them to find a balance with the rest of the world in order to survive. 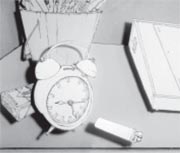 Tomorrow to June 29: “New Enemies.” The participants of this exhibition are young artists that are known for their keen examinations of their social surroundings and their place in the field of modern art.

“New Enemies” mainly focuses on these young artists’ desires to look at modern art in an objective manner and it tries to re-evaluate the progress that the art world has made so far. The first question that the exhibit asks is, what are the characteristics of modern art and how can we define it?

The exhibit is geared toward an audience that is not that familiar with modern art.

By providing people with a theoretical and historical background in modern art, the exhibit organizers hope that visitors will come away from the exhibit with a totally different perspective on modern art. 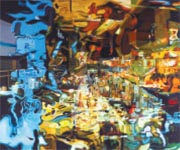 Around the world, cities have been growing at an unnatural speed. Science and technology have transcended the limits of human ability and have developed a life of their own.

The twisted forms of skyscrapers, the extravagant things that try to fulfill the appetites of its creators, the furious city lights which seem to negate the differences between night and day all seem to evolve into organisms that try to communicate with humans rather than being their mere possessions.

Hye Ja tries to understand the “emotional city” by portraying the uncontrollable energies of these growing cities. Her interpretations show an unclear line between reality and virtual reality with unidentifiable objects that almost overwhelm the viewer. By not having a clear image of the environment humans live in, she is trying to deliver the message that this may be the true form of city life.