Library gets kids to read up on mom

Library gets kids to read up on mom 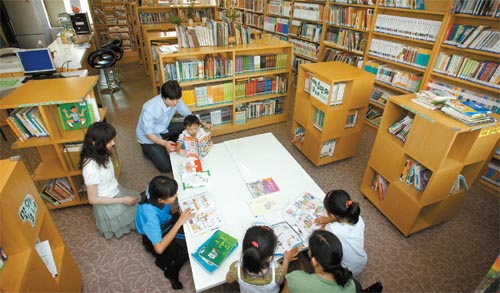 Library Modoo has a collection of more than 16,000 books, 6,000 of which are from marriage migrants’ countries. The library, located in Imun-dong, Dongdaemun District, expanded its collection to give marriage migrants and their children a way to connect. By Oh Sang-min


Even before Nhung, a 25-year-old Vietnamese woman, settled in Sinchang-dong, northern Seoul, two years ago, her mother- and sister-in-law sent her to Korean cooking and language classes to help her prepare for the transition to Korea.

Nhung is one of the many marriage migrants in Korea who arrive hoping for better lives. What they often find, however, is a struggle with culture and language that only becomes more difficult when children become part of the picture.

Although the government has taken steps to address the issues faced by Korea’s growing population of multiethnic families, the programs are largely focused on getting the women to adapt to Korea rather than helping members of the whole family adjust. And it is the women who suffer.

“From the moment they arrive here, these women are pressured to forget their language, culture, everything. We can see evidence of this in the resettlement programs for multiethnic families - they are mostly for the women who migrate here and are focused only on Korea,” said Kim Jeong-hyun, an activist working at Modoo, the nation’s first library for multiethnic families in Korea, located in Imun-dong, Dongdaemun District, central Seoul. “Modoo” means “everyone” in Korean.

“Since learning a foreign language is not easy for adults, we have seen many marriage migrants face frustration when communicating with their children. To make matters worse, the children feel ashamed of their mothers, many of whom can’t speak Korean fluently,” said Kim.

“So we decided to give the children a chance to get to know their mothers’ countries. And we believed the mothers would take pride in teaching their children about their countries.” 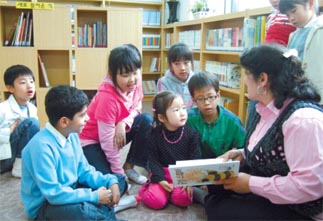 Meheran, who is from Iran, reads to children at Library Modoo. Provided by Modoo

The library is hoping to inspire children from multiethnic families to learn the languages of both their mothers and their fathers.

“When children can’t communicate with their mothers, we will see various social problems in the near future. And that is one of the reasons why we have to educate these children to become bilingual,” said Lee Hyun-mi, a team head at Save the Children Korea’s multicultural business division.

In fact, reports show that marriage migrants are vulnerable to depression because they have to adapt to a new environment, often with little support. According to the Migrant Health Association in Korea, depression is the third most common factor threatening the health of marriage migrants. Similarly, Eunpyeong Hospital’s Multicultural Mental Health Clinic, a state-run clinic located in northern Seoul, said that it has treated an increasing number of marriage migrants in recent years.

But experts say that women who are healthy - both physically and mentally - have a better chance of leading happy families.

“A mother’s depression can affect the overall development of her child. A child raised by a mother suffering from depression has a difficult time achieving intellectual, emotional and mental development for the rest of their lives,” said Shin Eui-jin, a professor of pediatric psychology at Yonsei University.

To help these women regain their self-esteem, Modoo has created two new programs to help connect mother and child. 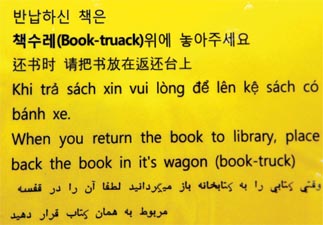 Library rules are written in at least five languages including Korean, Chinese, Vietnamese, English and Arabic. By Oh Sang-min

Its most ambitious program is its growing collection of children’s books from marriage migrants’ countries. In assembling the collection, the library wanted to provide children with greater access to information and materials from their mothers’ countries. Its collection now consists of books from 11 countries: China, Nepal, Japan, Thailand, Vietnam, Russia, Mongolia, Bangladesh, Indonesia, Iran and the Philippines.

“In children’s books, you have everything - culture, food and clothes,” said Modoo’s Kim.

Women who bring their children to the library have said that reading children’s books in their own languages gives them a renewed sense of pride.

“I felt good because I can read stories from my country to my children and even to other Korean children,” one woman from Bangladesh wrote in a note on a bulletin board at Modoo. “My children are also proud of me.”

Modoo has faced several obstacles in building its book collection.

“The National Library of Korea didn’t have any experience with buying children’s books from these countries, so we had to ask some of the women we know to bring a couple of children’s books back with them whenever they back to visit their home countries,” Kim recalled.

The women face obstacles, too. The fathers and grandparents often don’t approve of their children or grandchildren leaning their mother’s language.

“Some Koreans judge a country by its economic status and they think there is no need to learn minor languages such as Vietnamese,” said Hong Jong-myung, a professor at Hankuk University of Foreign Studies.

The Imun-dong branch, which is nestled on the second floor of a five-story building near Hankuk University of Foreign Studies, offers 16,000 books, 6,000 of which are from marriage migrants’ countries.

The library also stages puppet shows based on folktales from Iran, Mongolia, Vietnam, Korea, China, Japan, Indonesia and the Philippines.

The mothers write and direct the shows, make the puppets and present shows almost every week in kindergartens, cultural centers and schools in the Seoul area.

About 80 percent of the puppet show is presented in Korean and the rest is performed in the language of one of the mothers.

Beyond their entertainment value, the shows have also become a source of income for some of the women, who sell tickets for shows presented outside the library. This not only helps boost their self-esteem, but also gives them a sense of autonomy.

During a visit to the library on one recent weekday, the library was bustling with activity. Volunteers were reading books to children on one side of the room, while five children of both Korean and mixed descent sat cross-legged, books in their laps, in the middle of the library. One of the children, a Korean girl who is the daughter of a woman who works at a noodle restaurant on the first floor of the building, lay sprawled out on the floor, reading, while Kim Woo-hye, 10, who was born to a Japanese mother and a Korean father, sat reading next to her.

Nearby, Woo-hye’s mother, Miyuki Nakai, was typing data for a Japanese book into a computer. She began volunteering at the library last week, but has been bringing her two children here for over a year.

“As you can see, there are no boundaries between multicultural and Korean children. They just mingle with one another naturally. We need more places like this where we can be accepted as we are.”