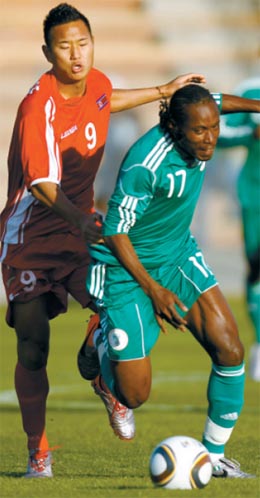 The lure of free tickets set off a stampede before Sunday’s friendly match between North Korea and Nigeria in Johannesburg, South Africa.

Both teams’ players were unaware of the pregame commotion, which left 15 people injured, including one police officer who was seriously hurt.

Five days before the kickoff of the 2010 World Cup, thousands of football fans stampeded outside the 12,000-capacity Makhulong Stadium, and several fans fell under the rush of people, many of whom were wearing Nigeria jerseys.

“At this moment we have 14 civilians who were slightly injured in the process, one policeman seriously injured,” police spokesman Lt. Col. Eugene Opperman said outside the stadium.

The injured were being treated at a hospital, he said. Opperman said tickets for the game were given out for free outside the stadium.

“What then occurred was large groups of people gathered outside the gates wanting to come in and wanting to get free tickets. Unfortunately in the process, the gates were opened and there was a stampede,” Opperman said.

One policeman blamed FIFA for the trouble. “FIFA made the tickets free and now look,” said the policeman, who refused to be identified because he was not authorized to speak to the media. “FIFA wanted them free.”

But football’s international governing body said it had nothing to do with the ticketing.

“FIFA and the OC [local organizing committee] would like to reiterate that this friendly match has no relation whatsoever with the operational organization of the 2010 FIFA World Cup, for which we remain fully confident,” FIFA said in a statement.

One fan, wearing a South Africa rugby jersey and bleeding from the head, said the rampaging crowd overpowered him.

“I fell down and people just fell over me,” Japhta Mombelo said. “That crowd is overpowering. The police have told me to stay around and they will organize an ambulance but I am still waiting.”

The first rush came when the gates opened to allow fans into the stadium. Police soon closed the gates, but when they were reopened, a second rush occurred, with more people falling and being run over.

“When we were coming in they were just stepping on us,” said Princess Mbali, who was wearing a green South Africa shirt.

“I thought I was dying. I was at the bottom.”

Shortly after the second rush, the gates were closed again and much of the crowd dissipated.

“The police aren’t saying anything, just go and watch the match,” Mbali said. “How can we watch the match when we are hurt? Maybe my ribs are broken. No one is helping us and we are South Africans.”

The injured policeman was bloodied in the crush and later taken away on a stretcher. Other fans who appeared to be lightly injured walked away from the scene as it calmed down.

The Nigerian and North Korean teams were lining up for the national anthems when the second surge happened. They had no idea what was going on outside.

The match was suspended for about 10 minutes shortly after the second half began, but it restarted with Nigeria leading 1-0. The Nigerians won 3-1, despite showing flaws in their teamwork and defensive lapses.

Yakubu Aiyegbeni opened the scoring in the 17th minute, but North Korea’s Jong Tae-se managed to take advantage of a defensive miscue to score an equalizer in the 61st minute. Nigeria was awarded with a penalty shot in the ensuing minute on a handball call on one of the North Korean defenders. Although North Korea managed to create some quality chances, Obafemi Martins scored the third goal in the 90th minute.

“[South] Korea can definitely win its group match against Nigeria if it plays up to 100 percent of its capabilities,” said Jong in a post-match interview.

The win was the first for the Nigerian Super Eagles since manager Lars Lagerback took over the team in late February and the team showed flashes of creative and exciting offensive football.

But it also showed it needs work on its teamwork and defense.

The Nigerian starting lineup often lacked movement. Instead of its players actively creating passing lanes, it was common to see passes made by players standing still in one spot. But the Nigerian players are individually very skilled, and with more time to train and work together, they could cause problems for any opposing team.

The team is also weak on defense. Although Nigeria dictated the pace of the match, Pak Nam-chol and other North Korean players were able to penetrate the center of their opponents’ defensive zone to create several quality chances.

Meanwhile, FIFA alerted South Korea of the colors it will wear in the World Cup. Korea has been designated the home team for Saturday’s match against Greece and hence will play in red tops, white shorts and red socks. The Greeks will be dressed in blue.

The South Korean national team will also be able to wear their red jerseys in the away game against Argentina on June 18, but will have to dress in white tops, blue shorts and white socks for their third and final Group B match against Nigeria on June 23.