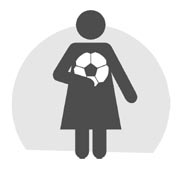 British author Nick Hornby once famously said that he would rather miss a friend’s wedding than an England World Cup match.

This audacious remark would surely make most wives and girlfriends shake their heads in disgust.

Hornby is famous among football fans for his autobiography, “Fever Pitch.” He is an avid fan of the Arsenal Football Club in the Premier League. He confesses in his book that as a boy he would awake on match days with a nervous churning in his stomach, a feeling that would intensify until Arsenal had taken a two-goal lead.

Hornby confesses that football has become such an obsession in his life that he would not help his girlfriend if she went into labor during an Arsenal game.

Not many women would consider a football maniac like Hornby an ideal man. A man’s obsession with sports can often bring discord between husbands and wives, boyfriends and girlfriends. The World Cup season is a time when the difference between the collective interests of men who are interested in sports and women who aren’t is starkly demonstrated.

While these women might not go as far as Dutch scholar F.J.J. Buytendijk, who compared football to a cowardly dogfight, some women still do not get the point of 22 men all chasing after one ball for 90 minutes.

This discrepancy in interests can create a rift in relationships, making one side feel alienated. An example of this are the so-called “World Cup widows” who appeared in Europe during the 2006 World Cup in Germany. There was even a popular joke that a real widow at least gets an inheritance and condolences from others while a World Cup widow is left with nothing.

A World Cup widow is worse off than the “Sunday widows” that appeared in Korean society a few years ago due to a fishing boom. While fishing only took your husband away from you, football takes away your son as well.

To these women who feel ostracized during World Cup season, I suggest learning more about the game. By understanding the passion of football-loving men, relationships can grow stronger and women won’t feel so much like widows.

In “Women Who Know Football,” author Lee Eun-ha even writes that “Men adore women who empathize with their stories about football during their military years.”

The World Cup games in South Africa will open in a few days. With the festivities ahead, there are a flood of new books on football out and public lectures on the history of the game are taking place.

There’s no better time than the present to learn more about the game and join in on World Cup fever. You don’t have to skip a friend’s wedding or your child’s birth, but why not spend some quality time with your loved ones watching the games?