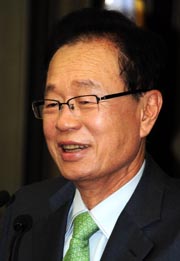 Park ran unopposed after Lee Yoon-sung, a four-term lawmaker who had served as a deputy parliamentary speaker, withdrew.

Chung Ui-hwa, a four-term lawmaker, has been nominated as the party’s new vice parliamentary speaker, GNP officials said. He won 97 of the 156 votes cast in the race against Park Jong-keun and Lee Hae-bong, also four-term lawmakers.

Park and Chung, both seen as pro-President Lee Myung-bak figures, are virtually guaranteed to be elected at today’s plenary session to lead the 18th National Assembly during the remaining two years of its term. Parliamentary leadership typically goes to the majority party, with the ruling and main opposition parties sharing the two vice speakerships.

The GNP also named chairpersons for 11 standing committees allocated to the majority party out of the total of 18. The remaining posts will be shared by the Democratic Party and the Liberty Forward Party.