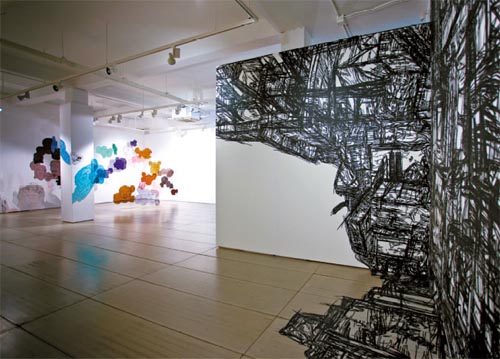 Above: Yoon Hee-seop’s “Storages,” which appears at the right of the photo, and Choi Won-jung’s installation “Extraordinary+Ordinary,” at left, are part of the exhibition at Arario Gallery Seoul. Provided by the gallery


Is the two-person exhibition becoming a trend among art galleries east of Gyeongbok Palace? Three major galleries in this area, one of Seoul’s art hubs, seem to be setting the pace with such shows.

In the entrance to the exhibition hall there is an aluminum sculpture of a horse painted red by Veilhan. His sculptures of humans painted black are on the second floor. All the sculptures have simplified forms with straight lines and angles.

“I take three-dimensional scans of people and animals, and often use my friends for the people scans, and then simplify them through a digital process until the point where their characteristics as humans or animals are minimized,” Veilhan said at a press conference in Seoul late last month.

“Through the process, the figures are depersonalized,” he continued. “But they still have a certain presence and I want viewers to see that .?.?. to have the feeling that somebody is behind you, when you are in the exhibition hall with the sculptures.” 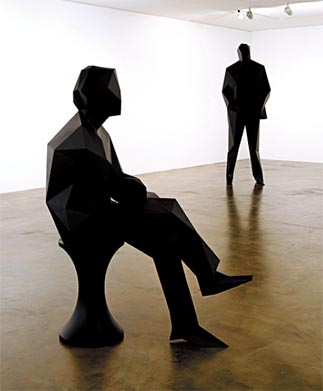 Othoniel’s works on the first floor are made of glass and look like enlarged necklaces or strings of beads. But because the beads are not perfect globes, they sometimes look like organic matter that is multiplying.

“Glass is special. It is easily shaped and open to diverse interpretations,” Othoniel said at the press conference. “This work is in accordance with my interest in the moments of transition when materials or objects change from one state to another.”

According to the gallery, Othoniel’s works are loved as public art in France and other countries. 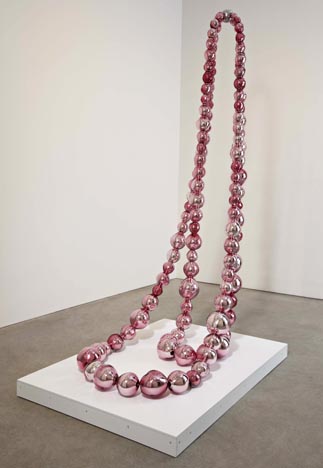 Although the two artists have strong yet disparate personalities, they do have some common points. Both use very unusual materials for their works - Hwang uses buttons and beads and Han uses X-ray film. In addition, both artists’ works dazzle but also have some appalling qualities.

Hwang’s plum trees in full bloom, made of glossy buttons dyed red and white, are just splendid at first glance. But the longer the viewer looks, the more uneasy they feel as they realize that the work could easily break into pieces. The little snakes hidden between the button blossoms add to the feeling of discomfort.

“Hwang’s work has bittersweet tones,” Maeng Jung-hwan, curator of the show, said. He added that Hwang’s works of buttons or beads resemble societies that consist of individuals, which can scatter at any time.

Meanwhile, Han’s flower works shine mystically in the dark, but a second look reveals that the petals are made of appalling X-ray films showing pictures of human bones.

Han started these works after he had X-rays taken of his body following a terrible traffic accident, Maeng said.

“Accordingly, the X-ray films are symbols of agony and the fear of death,” the curator said. “But the films become flowers in his works, showing that life and death are not divided but coexist in a circle.” 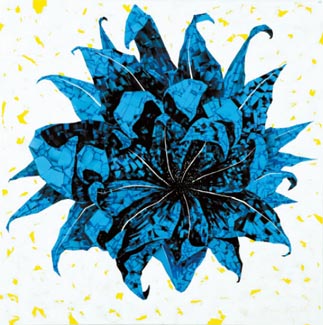 On the first floor, Yoon Hee-seop’s large-scale installation, “Storage,” is made of black tape and looks like a bold line-drawing on the wall. “Yoon depicts objects that are easily spotted in everyday life yet have no immediate use, rendering them in layers of tape or in thick flowing lines with pen,” Ryu Jung-hwa, an exhibition curator, said.

On the opposite corner is an installation by Choi Won-jung. The drawings, which are hung from the ceiling on thin plastic sheets, depict ordinary New Yorkers and are based on personal ads they wrote for the tabloids there, she said. There is also an installation by Choi, which consists of transparent plastic sheets shaped like fish and feathers hanging from the ceiling. As the light reflects off the plastic sheets, their shining transparent surfaces and the shadows they cast on the walls create a dream-like ambience.

“I imagine that fish and feathers were originally a single organism that later evolved into different organisms to adapt to different surroundings - they became feathers in the West and fish in the East,” Choi told reporters. “This was what I imagined during my struggles as a foreigner living in a different country, and the process of transforming my way of life.” 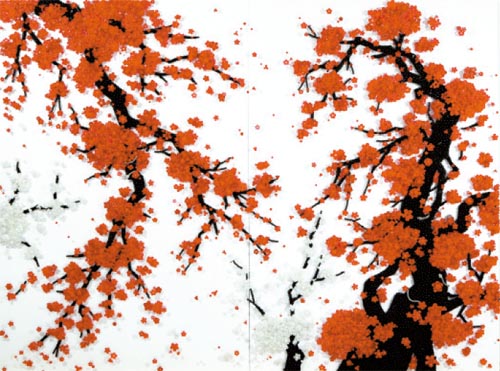 “Sweet In-Yean” (2010) by Hwang Ran is made of buttons. Provided by Hakgojae Gallery Seoul