Music and performance for summer nights out under the stars

Music and performance for summer nights out under the stars 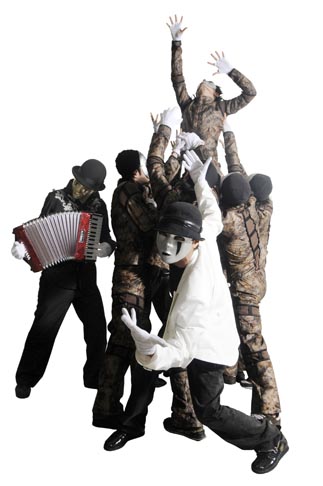 The B-boy group Expression Crew will present an encore performance of its hit “Marionette” on June 30 as part of the Culture and Art in Seoul Plaza event. Provided by the organizer

Culture fans have something to look forward to this summer in the form of two annual events that bring the concert hall outdoors at major sites in the heart of Seoul. The events, at Seoul Plaza and the Sejong Center for the Performing Arts, are free for people of all ages.

Culture and Art in Seoul Plaza

This event, presented by the Seoul city government and now in its fourth year, features a diverse program of free performances organized around different themes each month.

“Through the program, Seoul Plaza will be the place where everyone can get together and enjoy culture in Seoul,” Ahn Seung-il, director of the Seoul Metropolitan Government’s culture team, said. “It will be a nice surprise for locals and foreigners alike and a good opportunity for artists to communicate with the general public.”

This month, there will be dance performances in genres ranging from ballet and tango to jazz and salsa. The list includes, but is not limited to: “Comic Music Show with a Strong Beat” featuring emerging “fusion performance” groups such as Fanta-Stick and Miji (tonight), a concert by Japanese ocarina player Kimura Hitoshi (on June 13), a ballet gala by the Seoul Ballet Theater (on June 29) and an encore performance of “Marionette” by Korean B-boy group Expression Crew (on June 30).

In August, a number of orchestras based in Seoul, including the Seoul Philharmonic Orchestra, will play an array of classical music for sleepless summer nights in a program called “A Midsummer Night’s Concert,” while September features a series of jazz concerts, including one called “I Love Seoul, I Love Jazz.”

Performances begin at 7:30 p.m. every evening through Oct. 8. There are no performances on Mondays, rainy days or days when special events, including World Cup matches, are scheduled.

*For more information about the program, visit www.casp.or.kr. 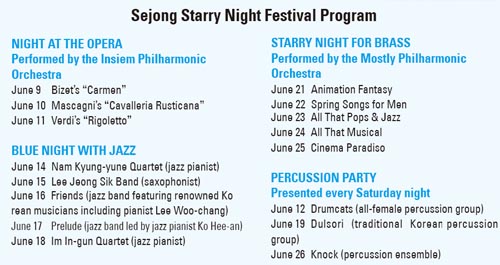 This month, the Sejong Center for the Performing Arts’ annual Starry Night Festival kicks off with music to make you sing, from classical to jazz and popular favorites.

The festival was launched by the city-run arts institution in 2005 as an evening event for people of all ages and its popularity with Seoul citizens has grown over the years.

In the first week of the festival, from June 7 to 11, there will be music from well-known operas, including “Carmen” by Georges Bizet and “Rigoletto” by Giuseppe Verdi. Accompaniment will be provided by Insiem Philharmonic Orchestra, a local group.

During the second week of the festival, from June 14 to 18, the spotlight is on jazz in a program called “Blue Night with Jazz.”

In week three, from June 21 to 25, the Mostly Philharmonic Orchestra, another local group, will perform a variety of musical hits, from classic pop songs to musical numbers and movie music, in a program called “Starry Night for Brass.”

Every Saturday night throughout the festival there will be a “Percussion Party,” with performances by top-notch Korean percussion groups.

The series starts this Saturday with Drumcats, an all-female percussion group that won the Herald Angel award for performance at the Edinburgh Festival in 2008.

The event continues with a performance by Dulsori, a traditional Korean percussion group whose name means “the sound of the field.”

The Sejong Starry Night Festival 2010 will continue through June 26 with a variety of performances every evening except Sundays. Performances begin at 7:30 p.m. and last for an hour with the exception of June 12 and 17, when performances will take place from 7 to 8 p.m. to accommodate broadcasts of Korea’s 2010 World Cup matches, which are scheduled for 8:30 p.m. Performances will be held on the main stairway leading up to Sejong Center.