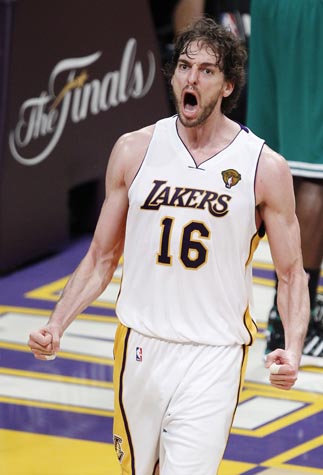 The Los Angeles Lakers’ Pau Gasol celebrates after a basket against the Boston Celtics during the first half of game two of the 2010 NBA Finals basketball series in Los Angeles on June 6. [REUTERS/YONHAP]

LOS ANGELES - The Los Angeles Lakers’ Spanish star Pau Gasol says Europeans in the NBA are judged differently. So when people try to question his toughness, the forward takes the criticism with a pinch of salt.

“It is something that has been a question that I’ve gotten the most throughout the last couple of years,” said Gasol, who had a team-high 25 points in the 103-94 loss to the Boston Celtics in game two of the NBA finals on Sunday.

“It is pretty amazing to me and such a surprise that it is talked about so much.

“You have a couple of bad games, tough losses and all of a sudden you got a label there. I feel most Europeans, we get that label no matter what. It is just a given. It is like you have to prove yourself every single game that we are tough.”

The 29-year-old Gasol has been hearing the criticism for the last two years since the Los Angeles Lakers lost the 2008 finals to the Boston Celtics in six games. Gasol helped the Lakers win the championship last year but the criticism didn’t stop.

Europeans aren’t the only ones who get unfairly labeled by their NBA peers. China’s Yao Ming had to overcome the same criticism when he first joined the league. Gasol, of Barcelona, answered the critics with a superb performance in a 102-89 Laker rout of the Celtics in the opening game of the championship series. His 14 rebounds were more than Kevin Garnett, Kendrick Perkins and Rasheed Wallace’s put together.

He came back in game two with another strong performance, shooting seven-of-10 from the field and equaling a career post-season high with six blocked shots. The series now shifts to Boston for three games and Gasol said the Lakers need to tweak their game plan to try and bring the series back to the Staples Center.

“We definitely need to make sure we hustle a little more,” Gasol said ahead of game three. “We have to try and play together, execute and do the things that work for us.”

Heading into the finals, Gasol was the Lakers’ leader in rebounds (174) and blocks (30) and second in assists (55) and scoring (20 points per game). Gasol said everyone is going to have to play better down the stretch in game three.

“We will try to adjust for game three because it is a big-time game again,” he said. “We are going to have to really be extremely aggressive and strong mentally and physically.”