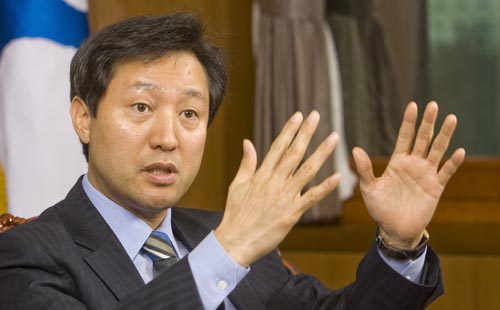 Listening to the voice of local council members and ward office heads was the first pledge that Oh Se-hoon, the first elected two-term mayor of Seoul, made after his narrow victory in the June 2 polls. Reflecting on his razor-thin victory over the main opposition Democratic Party candidate Han Myeong-sook, Oh stressed that he would focus on “courteous listening” and “communication.”

He promised to form a “citizen communications headquarters,” made up of common citizens from students to taxi drivers as a sounding board. He is conscious of the political solitude that he faces since he will be surrounded by opposition figures. The following are excerpts from an interview last Friday.

A. To be honest, I was really distressed [at the election outcome]. In the early stage of vote counting, I was aware the ballot boxes from Gangnam, Seocho and Songpa were not open yet. I thought I could win by a minimal margin. But I was devastated to find out later that all those elected ward office heads and council members were from the opposition party.

Some say you are the “mayor of Gangnam” since you won the most votes from that district.

I can’t agree with that. While the ratio of ballots in my favor from the three wards in Gangnam was 80 percent in the previous election, this time it fell to 60 percent. Instead, votes for me in northern Seoul, or Gangbuk, increased. I think the past four years of policies for lower-income households in non-Gangnam areas have been well received by the residents.

I will talk with Kwak with an open heart and every opportunity in mind. We will prioritize the investments to be made in education and proceed step by step.

While you pledged to purge the eduction system of violence, tutoring classes and students’ need to purchase classroom materials, Kwak has promised free lunches.

Seoul has spent 350 billion won ($283 million) on public education in the past four years. This time I promised free meals for students from families at the bottom 30 percent of the income bracket and spend the rest on school welfare. But Kwak insists all students should receive free meals. Both of us will try to carry out what we have promised but I believe we can implement things that are the most realistic after holding discussions with each other.

What do you think of the view that you are the next most promising presidential candidate?

Please don’t ask me that kind of question.