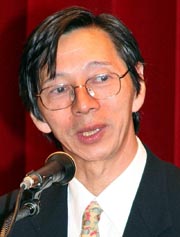 He will replace Toshinori Shigeie, who has been in the seat since August 2007, according to Japan’s Yomiuri Shimbun newspaper.

Muto, 61, has served three stints in the Japanese embassy in Seoul, and is known to be fluent in Korean. He has also worked at the Japanese Foreign Ministry’s Northeast Asia bureau.

The Tokyo native graduated from Yokohama National University and joined Japan’s Foreign Ministry in 1972 before serving in posts in the United States, Korea and Kuwait.

Muto has never served at a director-level position at the Foreign Ministry headquarters in Tokyo, making his appointment a conspicuous break from past practice.

His appointment will be confirmed by the cabinet as early as Tuesday, the newspaper said.

While at the Japanese embassy in Korea, Muto played a role in a diplomatic squabble after an internal report by the Japanese Foreign Ministry criticizing then-President Roh Moo-hyun was leaked to the Seoul press in 2006. The report argued that the Roh administration was fanning Korean nationalism about the disputed islets of Dokdo to shore up falling voter support. The Japanese also claim the islets, which they call Takeshima, as their territory.

The report also said that Roh, in order to ward off a lame-duck image before his tenure ended in early 2008, would never give up his hard-line policies on Japan.

The leak drew fierce criticism in Korea, and the Foreign Ministry summoned Muto to submit an official complaint.