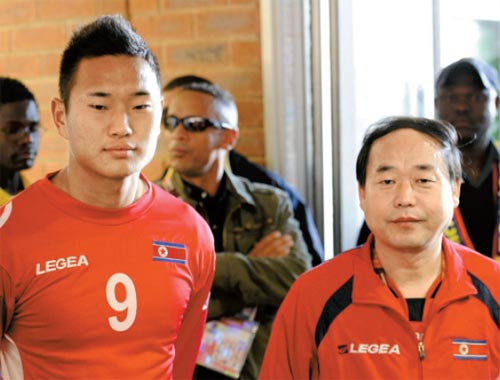 
JOHANNESBURG - Lifting the veil of secrecy that has cloaked North Korea since their arrival at the World Cup, striker Jong Tae-se has predicted a shock victory over Brazil.

North Korea, making their first appearance at the World Cup finals since 1966, have cancelled media conferences in South Africa and expelled journalists hoping to catch a glimpse of the mystery men at training.

However, Jong looked the world’s media squarely in the eye on Tuesday and said North Korea had nothing to fear from Group G opponents Brazil, Portugal and Ivory Coast.

“The game will be very difficult for us but we will win against Brazil,” Jong said, standing with his shoulders back and his chest puffed out proudly.

“Everybody thinks we can’t win that game, but we have brave hearts, strong spirits and that can help us make a miracle.”

Speaking at the Makhulong Stadium, where a stampede by fans on Sunday left 14 injured and a policeman in a serious condition, Jong said he hoped the World Cup would be an opportunity to put a human face on North Korea.

Full of endeavor and defensive discipline but lacking true top-class talent, most pundits believe the North will be lucky to earn a point from the group stage. However, equally little was expected of them 44 years ago when they beat Italy 1-0 to make the quarterfinals in England, then led Portugal 3-0 before a Eusebio-inspired fightback earned the Europeans a 5-3 win.

“I grew up with a video of the 1966 World Cup so I really want to be like that, make a surprise for the world,” he said.

“Everybody called it the ‘Group of Death’ and when we heard about that we were surprised,” he said. “But I’m happy with that group because before I could only see Kaka and Ronaldo [sitting] in front on TV. Those players are my target, so I’m really looking forward to playing against them.”

North Korea face Brazil at Ellis Park in Johannesburg on Tuesday before taking on Portugal in Cape Town six days later and rounding out the group campaign against Ivory Coast in Nelspruit on June 25.