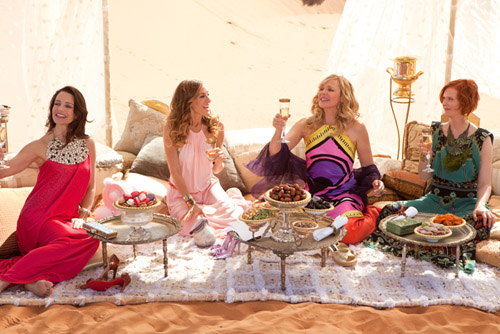 The ‘“Sex and the City 2” ladies flaunt their fashion sense. The film opens today in Korea. Provided by Warner Bros. Korea

NEW YORK - There’s a telling scene early in “Sex and the City 2” when 52-year-old Samantha, played by 53-year-old Kim Cattrall, spots a gold, beaded bustier minidress that she thinks will be perfect for a big red-carpet moment.

The saleswoman is the first doubter. “Is it maybe a little young?” she asks.

Carrie, Samantha, Charlotte and Miranda have fashion confidence like few others - on film or in real life. But the sequined armor these women wear along with their microminis, harem pants and stiletto heels suffers a few chinks over one issue: Do they dress their age?

Samantha’s friends question the minidress, too. But an even more important movie moment is when Samantha rocks the dress, putting conventionalists and teenager Miley Cyrus, who is on the same red carpet in the same dress, in their place.

Throughout the movie the posse parades around in the most au courant clothes, seemingly not deterred at all by the fact that designers often use lithe, lean teenage runway models as muses instead of the 40-plus successful shopaholics the characters now represent.

Some of the outfits are knockouts and incredibly flattering - like the pleated, flame-colored sundress worn by Carrie (Sarah Jessica Parker) on the beach, and the plunging V-neck gown with metallic studs worn by Miranda (Cynthia Nixon) to a wedding - but there also are the misses.

It shouldn’t be assumed, though, that Charlotte’s (Kristin Davis) dorky strapless candy-cane get-up or Carrie’s ill-conceived logo-T-and-poufy-ballskirt combination would look any better on a 25-year-old.

“I think it’s all about where the individual is in what they are comfortable and confident wearing,” says accessories designer Brian Atwood, who crafted two pairs of 6-inch heels for Carrie’s closet, including studded, purple-suede peeptoes. “I don’t like to dictate boundaries to anyone... I think it’s the whole package. I’ve seen older women in their ’80s-style rhinestone jackets with short miniskirts, but anyone would look ridiculous in that.”

A chic, sophisticated stiletto is another story, Atwood says.

“Some women just like high heels. They help give you great legs and they give you height. Women like how they feel in heels and what it projects.”

An honest analysis of one’s assets - and trouble spots - as well as lifestyle and personal style will get you farther in developing a flattering, appropriate wardrobe than counting birthday candles, say the experts.

“You need to know what parts of your body should be shown off,” advises Deborah Lloyd, co-president and creative director of Kate Spade New York.

The actresses in “Sex and the City” surely work hard at keeping their figures in good shape so they can pull off some daring things, she says, but they also stay true to their characters’ fashion personalities.

Lloyd points to First Lady Michelle Obama as an example of a woman who highlights her strengths - those toned arms, in particular - and maintains a youthful, modern look with interesting silhouettes and bright colors, while never trying to dress too young.

“Fashion as you get older is about an evolution, not just about changing your look because you’re older. You can’t get stuck,” Lloyd says.