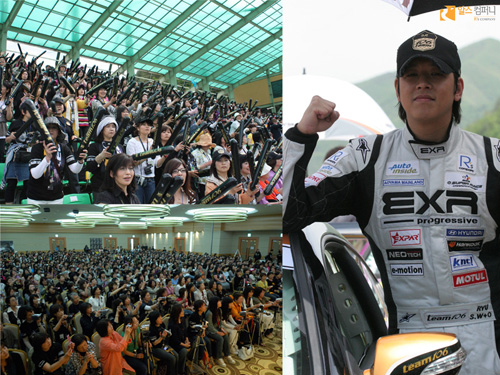 Korean actor and signer Ryu Si-won has teamed up with the Korea Tourism Organization to promote two tour packages to overseas travelers, especially those from Japan, where he has a large fan base. Ryu, who has a professional racing license, often participates in races in Korea, and many of his Japanese fans visit Korea to see Ryu drive. Provided by the Korea Tourism Organization

Korean actor-singer Ryu Si-won will team up with the Korea Tourism Organization to attract overseas travelers to Korea, especially tourists from Japan, where he has a large fan base.

The KTO said in a statement late last month that it had signed a contract with Ryu to develop two new tour packages.

One of these is a tour that gives travelers access to the Formula 1 World Championship Korean Grand Prix in Yeongam, South Jeolla, in October and includes a visit to Damyunjae, a traditional Korean house in historic Hahoe Village, Andong, North Gyeongsang. Ryu has a professional racing license and often competes in races here, and many of his Japanese fans have visited to see him drive. Damyunjae is also a popular destination for Ryu’s fans because the house is owned and maintained by his family.

The other tour will be organized around Ryu’s birthday. About 3,000 fans from Korea and overseas will make the trek to Korea to attend a birthday event organized by Ryu’s agency.

“In the past, celebrities allowed us to use their images in our promotions but this is the first time that a major star like Ryu will make personal appearances to attract visitors,” said Han Eun-ji, an official with the KTO’s public relations team.

After witnessing what it calls the “Bae Yong-joon effect,” the nation’s tourism body decided to enlist other celebrities who are popular overseas to help boost tourism this year.

Korean actor Bae Yong-joon became popular throughout Asia with his portrayal of the sophisticated main character in the TV drama “Winter Sonata.”

Eight years later, his fans are still willing to spend money on items related to him.

Although the drama series came to an end in March 2002, Keyeast Co., the entertainment company that produced an animated version of Winter Sonata that was released last year, said it saw a sales increase of 223 percent from a year ago in the first quarter of this year due to sales of the drama.

Bae has worked as a promotional representative for the KTO for the past three years, and the tourism organization believes his efforts have contributed to higher-than-expected number of travelers from Japan, where he is extremely popular.

Like Bae, Ryu has also a large fan base in Japan. A total of 1,200 Japanese fans were invited to an event for fans in February and desperate fans searching for invitations helped push the ticket price to 2 million won ($1,818). His concerts in Japan also often sell out. The 80,000 tickets for his concert there last November sold out quickly.

“Most of Ryu’s fans are Japanese, so we expect to earn about 15 billion won if we succeed in meeting our goal and attract 10,000 visitors from Japan this year,” said Han. “A Japanese tourist spends about $1,300 in Korea on average, so it is a possible goal.”

Although the Korean wave, or hallyu, has started to fade in Japan, some Korean stars continue to maintain huge fan bases there. Along with Bae and Ryu, actor Park Yong-ha, comedian Cho Hye-ryun, actor Lee Byung-hun and Kwon Sang-woo often make headlines in Japanese entertainment news and many of the nation’s idol groups still head to Japan in hopes of becoming the next Bae or Ryu. Most recently, girl groups T-ara, 4 Minute, After School and KARA debuted in Japan.