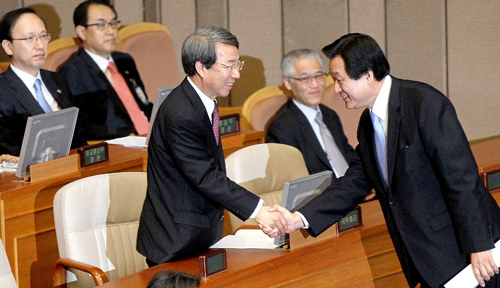 Grand National Party floor leader Kim Moo-sung, right, greets Prime Minister Chung Un-chan, a proponent of the revised Sejong City plan, left, in the main conference hall of the National Assembly. In a speech yesterday, Kim declared that the GNP will no longer unconditionally defend the administration or turn a blind eye to its shortcomings. [YONHAP]

In his speech before the National Assembly, Kim declared that the Grand National Party will no longer unconditionally defend the administration or turn a blind eye to the government’s shortcomings.

Originally put forward by Roh Moo-hyun as a presidential election pledge in 2002, the Sejong City project called to relocate government offices to a new administrative hub in South Chungcheong. President Lee Myung-bak, however, ignited controversy last year by announcing that he wanted to revise the blueprint to develop the city as a self-sufficient science, education and industrial center instead.

The National Assembly gave weight of law to the plan to develop the city as an administrative hub in March 2005, but this March the cabinet approved five bills to shift the city’s focus. The revision bills are currently pending at the National Assembly, but the prospect of endorsement is dim since not only opposition parties but the pro-Park Geun-hye faction inside the GNP object to the change.

Kim said the ruling party will embrace the sentiment expressed by Chungcheong residents in the local elections and try to reach a pragmatic compromise. On June 2, Democrats won the governors’ posts in North and South Chungcheong, while the regional Liberty Forward Party won the mayor’s office in Daejeon.

In his address, Kim said he will meet with religious, civic and environmental groups to persuade them to support the project to redevelop Korea’s four major rivers and their banks.

He also proposed that the GNP and opposition parties work together to create a special committee to reform election and administrative zoning systems and amend the constitution to meet the rapidly evolving political environment.

Other Grand Nationals appeared to agree with Kim’s stance on the Sejong City revision.

“We have to admit that we have lost the momentum to push through the revision,” Representative Jeong Tae-keun said in a radio interview yesterday. “I propose all lawmakers meet to discuss how we should handle this issue.”

He also expressed concerns about the Blue House’s handling of the election fallout.

“Some presidential aides appeared to think that it was the party’s defeat and the Blue House will just go ahead and run the nation the way it had done, and that worries me greatly,” Jeong said. “State affairs cannot be managed successfully unless both the party and the Blue House swiftly change.”

Including Jeong, about 50 first-term GNP lawmakers held a meeting yesterday afternoon to discuss reform of the party’s leadership and a Blue House reshuffle in the aftermath of the election defeat.