Job market on the upswing

Job market on the upswing 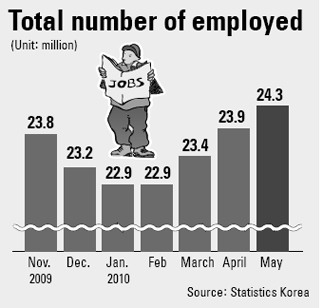 More people were newly employed in May than in any month during the previous eight years, as the Korean employment rate reached a 19-month high.

That number reflects the largest group of new hires in a single month since April 2002.

The employment rate has been on the rise for four consecutive months.

This is the second consecutive month that the unemployment rate is in the 3 percent range, an indication that the job market is rapidly improving.

The private sector saw the most new recruitment since July 2002, adding 517,000 in May. The employment rate in the private sector has been growing rapidly since February, when 142,000 people were added to payrolls.

The Ministry of Strategy and Finance attributed the continuing economic recovery to improvement in the job market. In the first three months, the economy posted an 8.1 percent on-year growth, higher than earlier forecasts.

The ministry added that job market recovery is getting stronger as private consumption increases amid higher manufacturing production rates thanks to rising export and larger investments.

The ministry also forecast that employment in the private sector will likely expand in the second half of the year if the economy keeps to its current course, while the job market in the public sector may drop, largely because that sector increased hiring last year in a move to ease the pinch from the economic downturn.

However, unemployment among young people still remains an issue. The number of employed people in their 20s fell 1.3 percent on-year to 3.82 million, while those in their 30s remained unchanged from the previous year, 5.86 million.