Training was a breath of thin air for Korea and Japan

Training was a breath of thin air for Korea and Japan 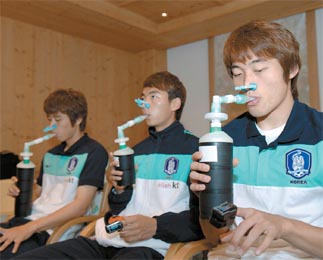 To get its players’ lungs ready for the 2010 Wold Cup, the Korean national team has relied on a “thin-air” lounge specially built to acclimatize players to high-altitude conditions in South Africa, while Japan has supplied each team member with an oxygen tank.

Two Asian football powers are taking measures to get their players acclimated to a country where altitude will likely be a key factor in a team’s performance. The Korean national team’s room, which is located at the national football training center at Paju, north of Seoul, looks like a regular lounge equipped with couches, bookshelves and DVD players.

But a rectangular metal box in the wall, which might otherwise pass for an air conditioner, is what makes the room special. Low-oxygen air is transported through the duct of a huge machine, which was imported from the Netherlands and is worth $130,000.

“It looks like an air conditioner but it can adjust oxygen levels at a simple touch,” Korea Football Association spokesman Lee Won-jae told AFP. “While reading books or watching football video footage, players can acclimatize to a low-oxygen environment.”

High altitude is likely to play a crucial role in South Africa, where five of the country’s nine host cities stand more than 1,000 meters (3,300 feet) above sea level. Balls will also fly faster and farther because of the thin air, which poses a potential nightmare for goalkeepers and defenders.

“We wanted to acclimatize a bit even before we got to South Africa,” Lee added.

Team doctor Song Joon-seop said the device replicates thin-air conditions similar to those seen at heights of up to 5,000 meters.

“By spending just one hour a day [in the lounge], the players can quickly adjust to high altitudes,” Song said.

Japan is equally concerned about being prepared for the conditions of the World Cup, with national coach Takeshi Okada ordering low-oxygen tanks for all 23 of the Blue Samurai. He told his players to use the tanks in order to get used to inhaling thin air.

“I want them to use them for one or two hours every day at home. For example, they can use them while watching TV,” Okada said. “I hear the All Blacks in rugby use them. I am also considering asking the players to use them while riding a bicycle.”

The Korean team has firsthand experience playing at high altitudes after being routed by Zambia 4-2 and held to a 0-0 draw by the South African club Platinum Stars in friendly matches last January in Johannesburg, which stands 1,750 meters high. “Players were unable to keep their balance, probably because of the high altitude,” coach Huh Jung-Moo said after one of the matches.

Many players said they felt their feet were leaden. In one example, heavily favored Argentina was thrashed by Bolivia 6-1 in April 2009 after playing in La Paz’s thin air.

In a further bid to get accustomed to high altitude conditions, the Korean team completed its final training camp in the Austrian winter sports center of Innsbruck, located in a valley between high mountains. Meanwhile, Japan trained in the Swiss mountain resort of Saas Fee at an altitude of 1,800 meters.