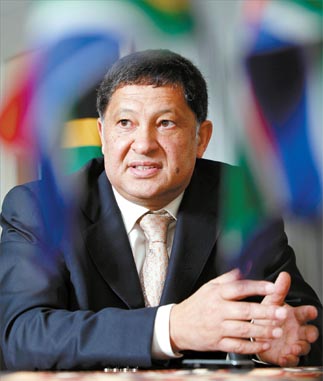 South Africa is hoping the World Cup will produce both tangible and intangible benefits that will help the country develop, according to one of the country’s top envoys.

In a recent interview with the JoongAng Daily, the South African Ambassador to Korea Hilton Anthony Dennis said the World Cup presents the host country with the opportunity to improve its infrastructure though the construction of modern stadiums and transportation systems. Dennis also believes the event will have an intangible impact by improving national pride, image and self-confidence, he said.

“We have a multicultural society, and the quest is to build a single nation out of a diverse population,” Dennis said. “Working on this scale helps you overlook petty everyday concerns, and you put the national interest before everything.”

He likened Korea’s growth after its hosting of the 2002 World Cup to his own country’s ambitions.

“In 2002, Korea’s GDP was about $510 billion, and our current GDP is $492 billion, so they are more or less the same,” he said. “If you look at Korea’s GDP today, it’s almost $1 trillion, roughly $850 billion if you count the recession. Korea’s GDP has almost doubled since it hosted the World Cup eight years ago, and I hope the magic works for us, too. That’s the type of achievement we’re looking for.”

The South African ambassador dismissed concerns about safety in his country, urging Koreans to join in the festivities there. Emphasizing that South Africa’s safety conditions have all been endorsed by FIFA and Interpol, Dennis said the country’s police have cooperated closely with law enforcement authorities in countries around the world to share information on protecting tourists.

Although his government has strengthened its security systems since winning the right to host the event five years ago, the most challenging task came in dealing with overly exaggerated concerns about safety, Dennis said, such as those after a recent attack during the Africa Games in Angola.

As the sole African nation belonging to the Group of 20, Dennis said that South Africa endorses the framework agreed upon at the last summit, which calls for member nations to work together for sustainable growth.

“For us, the G-20 is important because it broadens participation on key economic issues beyond the G-8,” he said. “The new world order, which is taking shape now, must be built on the principle of multilateralism. It is also very important that the framework of strong, sustainable growth benefit all countries in the world.”

The ambassador also expressed hope for greater economic exchange between Korea and South Africa. While Korea’s export-driven economy largely focuses on manufacturing, South Africa is a significant source of raw materials, and the two countries complement each other well, he said.

Noting Korea’s rapid transformation from an agrarian economy to an economic powerhouse, Dennis said he hopes to bring the lesson back to his country.

“Africa looks to Korea as a model of development,” he said.