Maradona set for blame or glory

Maradona set for blame or glory 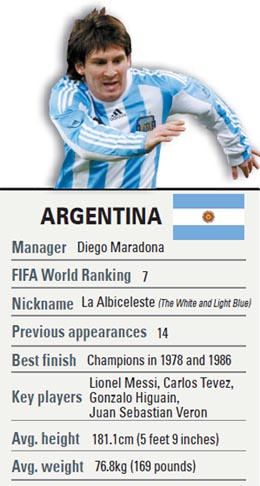 BUENOS AIRES - Diego Maradona’s World Cup career has been marked above all else by Argentina’s 1986 victory in Mexico and his expulsion for doping from the 1994 finals in the United States.

Maradona has pursued the World Cup since he first dreamed of winning the trophy as a 10-year-old, he told an interviewer.

He goes to South Africa with that goal in mind once again, hoping to emulate Germany’s Franz Beckenbauer by winning the trophy as coach after winning it as captain.

It is remarkable to compare the sprightly 49-year-old, keen to get on with the job and impervious to criticism of his selections and tactics, with the bloated beast who almost died of heart failure due to drug abuse six years ago.

Maradona is the archetypal survivor who also believes he is the man for the job, saying: “I know how to win the World Cup.”

No one doubts his experience as a player but few have faith in his ability, with minimal coaching experience, to get a talented squad of players to act as a coherent unit, something that was lacking during the qualifiers.

Maradona is criticized for believing that winning the World Cup is all about spirit.

“You have to put all your heart [in it], you’ve got to give your life,” he said on a television chat show recently.

When Maradona was appointed to succeed the aging Alfio Basile, who quit, in late 2008, many Argentines believed that once the shock of the decision had passed, he had the charisma to imbue his team with a winning spirit.

However, the proud Maradona likes to do things his way and has not wanted to take advice or help from Bilardo, preferring as he has done all his life to surround himself with yes-men.

Led by a talented group of players like Lionel Messi, Carlos Tevez, Gonzalo Higuain and Juan Sebastian Veron among others, Argentina could go all the way, or a well-drilled team with the right tactics could dump Maradona’s side out early on.

Maradona’s reaction to such an outcome is anybody’s guess, but he has the safety net of having signed up until next year’s Copa America, the South American championship, in Argentina.