Nigeria hopes to win for Africa

Nigeria hopes to win for Africa 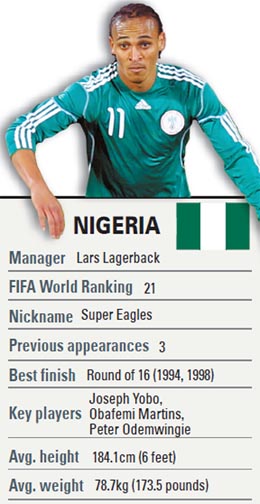 Brazil legend Pele’s claim that an African team would lift the famous trophy by 2010 has so far failed to come to fruition. But Kanu believes this year’s first tournament on African soil could prove Pele’s prediction correct.

Portsmouth striker Kanu, the most decorated player in African football history, said, “In football you cannot tell what is going to happen.

“We want an African team in the final and if that is Nigeria, then great.

Once the leading African football nation, Nigeria has floundered over the last decade with a meek display at the 2002 World Cup, failure to qualify for the 2006 tournament and a series of disappointing semifinal appearances at the African Cup of Nations.

It is a far cry from the era of Jay-Jay Okocha, Sunday Oliseh and Rashidi Yekini, who captivated fans with their attacking play at the World Cup in France in 1998, shocking Spain en route to the second round.

“Being in the semifinal and finals is our aim and we can do it. That is our dream and our goal and we will want to head toward it and we can get it.”

Kanu has amassed more than 80 appearances for Nigeria and was part of their Under-17 World Cup winning team and triumphant 1996 Olympic winning side. The Arsenal, Ajax and Inter Milan legend has won six league titles in three different countries, three FA Cups, a Champions League, a UEFA Cup and a European Super Cup, but the game’s biggest prize has so far eluded him.

Kanu said, “Everybody wants to be at his best on the highest stage at the World Cup. It is every player’s dream to be playing in South Africa and being part of such a historic event.

“For me, I want to score goals and if I can do that then we can do well.”

Nigeria failed to qualify for the 2006 tournament in Germany after an inconsistent campaign. But Kanu says that disappointment makes him more determined to steer his team into the knockout stages in South Africa.

“That’s going to make us give more, especially Nigeria, we love [football] and everybody in Nigeria doesn’t want to hear any excuse from us,” he added. “[The Nigerians] want us to do well and the pleasure is theirs, so we really have to achieve and do something for them.”