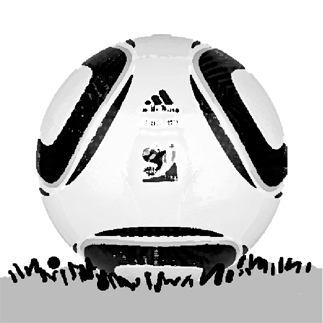 The first official FIFA World Cup match balls, made by Adidas, were used in Mexico in 1970. The “Telstar” ball was so named to celebrate the matches being televised live for the first time via satellite. It had 12 black pentagons and 20 white hexagons, judged then to be the closest shape to a perfect sphere.

Before that there was only one special regulation regarding soccer balls: The English football association required balls to be made of leather, but they came in various sizes and shapes. In the final match of the first FIFA World Cup in Uruguay, the two finalists, Uruguay and Argentina, insisted that balls from their own countries be used. After a debate, it was decided that a ball made in Argentina would be used in the first half and a ball from Uruguay in the second half. Nobody can be sure what effect that had, but Argentina was ahead 2 to 1 in the first half and Uruguay rallied to win in the second half, 4 to 2.

New World Cup match balls are developed with new names for every event. The Questra, introduced at the United States World Cup, was made of polystyrene foam, which made the ball lighter and more responsive. The Fevernova, the official match ball for the Korea-Japan FIFA World Cup, spun better, and added to the excitement (along with the Red Devils, of course). The Teamgeist, the official ball for the German World Cup, used 14 leather panels instead of 32. The Jabulani, the official match ball for the World Cup in South Africa, consists of only eight leather panels. The ball is closer to a perfect round shape than any other, and therefore its aerodynamics are supposedly better. South Africa will likely be a nightmare for goalkeepers.

At the same time, it is not easy to predict where the Jabulani will fly. Johannesburg is on a high plateau, around 1,700 meters (5,600 feet) above sea level, which means little air resistance. According to research conducted by the University of Tsukuba in Japan, when the Jabulani is kicked without spinning its path is very irregular. The power from the shooter is transferred to the upper part of the ball, then to the lower part and then the upper part again. The ball shakes or drops while it is flying. Even special football shoes for the Jabulani balls have been manufactured, with the fronts and sides made of different materials. The front is supposed to make a Jabulani fly quickly, and the sides are supposedly ideal for kicking the ball without spinning it. They’re like Chinese table tennis rackets, which have a rubber pad on one side and a pad made of a different material on the other.

Not only goalies but also attackers will likely have difficulty because of the unpredictability of the balls. The Korean saying, “The ball is round,” meaning there’s no way of telling where it will stop, will be proven right. It would be wonderful if we could achieve the incredible. Let’s cheer for our country in unison, just as we did before.