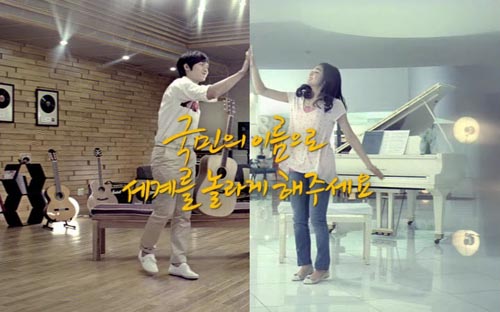 Lee Seung-gi, left, and Kim Yu-na, right, “high-five” in an ad to cheer on the Korean national World Cup team.

KB Financial Group has produced a video clip with SBS to cheer on the Korean national football team at this year’s South Africa World Cup. The clip includes the song “Smile Boy,” with the beloved celebrities Lee Seung-gi and Kim Yu-na.

The cheering campaign that began airing on May 26 is different from the regular “Korea Fighting” songs and clip shows, thanks to the touching lyrics of Smile Boy, a bright, cheerful duet that Lee Seung-gi and Kim Yu-na recorded together set to acoustic guitar. A rock version of “Smile Boy” will be revealed on June.

The celebrities Lee and Kim already flexed their marketing muscles during the Vancouver Winter Olympics. KB Hope Campaign model Lee Seung-gi appeared with Kim in a KB Financial Group commercial, with Lee cheering for Kim. Later, it was revealed that to avoid disturbing Kim’s training the commercial used computer graphics to make it seem as if the two had actually met. Of course, this drove anticipation that one day the two would actually meet. Now, of course, they have, to record the song together, some even thinking of it as Kim Yu-na’s debut as a singer.

The recording and filming was done at a studio in Gangnam and a modeling studio at the end of May. The campaign shows Lee Seung-gi and Kim Yu-na singing Smile Boy at different places and shows in split screens, and in the last scene the two cheer together.

According to a KB Financial Group executive, “We planned the campaign for the Korean soccer team, which is aiming to make it to the top 16 for the first time at an overseas World Cup, and hope all the people in Korea will enjoy the world festival like the bright and lively Seung-gi and Yu-na. We plan to provide fun things to see such as a making-of film on Microsite, Twitter and the blogs.”