Jang Ji-myeong, Kim Hyeong-il, Lee Sang-u, and Im Il-jin, from left, are part of a Korean expedition team that will climb Gasherbrum V next month. Provided by K2

On the morning of June 7, a Korean expedition team left for the Himalayas on a mission to climb Gasherbrum V, which has a height of 7,321 meters (24,019 feet).

If the Korean team succeeds, they will be the first team in the world to reach the summit of Gasherbrum V. A Japanese team tried but failed to make the ascent 32 years ago.

They will also be the first Korean team to climb a mountain higher than 7,000 meters in the Alpine style, which involves climbing without fixed ropes or high altitude porters.

“We will set out to conquer the 10 most intractable challenges of the Himalayas,” Kim Hyeong-il, the leader of the expedition team, said. “Gasherbrum V is our second goal after climbing the Spantik peak last year.” 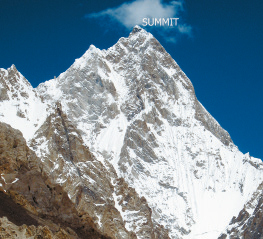 No human has ever reached the summit of Gasherbrum V, which is part of the Karakoram range in the Himalayas.

The team, sponsored by the JoongAng Ilbo and K2 Korea, left for the Himalayas on Monday morning and will begin climbing the mountain early next month.

Since the 1970s, when attempts to climb the Himalayas began in Korea, six Korean expedition teams have summited previously unconquered peaks as high as 7,000 meters. However, those explorations were all done in expedition style, which involves a fixed line of stocked camps with a large number of personnel.

Last year, Kim opened up a new Korean route on the northeastern side of the 7,027-meter-high Spantik, or Golden Peak, in Alpine style. Although the height of the Spantik is below 8,000 meters, it was the first successful attempt at Alpine-style climbing in Korea.

Kim is known among mountaineers as the “smile man” because he leads his team with warm smiles of encouragement. This is the best leadership method for an Alpine-style mountaineer, because in this kind of mountaineering, trust and companionship among those hanging on the same rope determine the fate for everyone.

Not only is Kim well qualified to lead the expedition team, the three other members of the team are also extraordinary climbers.

Thirty-seven-year-old Lee Sang-u cleans the windows of skyscrapers hanging from ropes, a job he started so he could go to the Himalayas. Jang Ji-myeong, 31, the youngest member of the team, quit his job at a major company to become a mountaineer. They, along with Im Il-jin, the remaining member of the team, are about to have their strength as Alpinists tested.

“We shouldn’t limit ourselves to the eight-thousanders,” said Lee In-jeong, president of the Korean Alpine Federation. “Countries more developed in mountain climbing are not only focusing on the eight-thousanders, and we also need to explore mountain peaks that are not necessarily the highest but are the most meaningful to climb.”

At the start of their journey, the expedition team will need to climb for five consecutive days without resting.

It will be a real test for the team, but as Kim often tells his fellow climbers: “A mountaineer should be able to climb a mountain without resting, eating or sleeping for three days.” For him, and other Alpinists, this is the purest form of mountaineering.

The expedition team will establish a base camp on the icecap near Gasherbrum V, 4,800 meters above sea level, on June 20 and set out to reach the summit at the beginning of July.