Frugal campaign is just the ticket for election

Frugal campaign is just the ticket for election 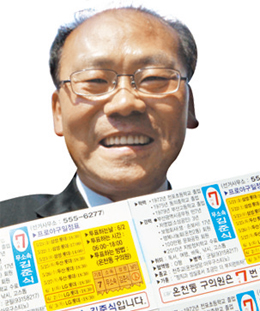 You might think it costs a fortune to run for a government office in the local elections.

But Kim Jun-sik, an independent candidate who won one of the three district office representative positions in Dongnae District, Busan, broke that widely held belief by winning a post with only 4,717,990 won ($3,780).

“Does it make sense that it costs a fortune just to elect someone who is to work for the community?” Kim said on Monday in front of a coffee vending machine at Lotte Mart, a large discount store. “I ran for office to show that you don’t need a lot of money to run a campaign and be elected.”

Candidates for district office representatives in Busan are allowed to spend up to 48 million won, but Kim used only 9.8 percent of the legally allowed expenses.

The National Election Commission of Dongnae District estimates that Kim spent the least amount of money on his election campaign among all the candidates in the recent local election.

“It is possible to get reimbursed for campaign expenses as long as you have receipts,” Kim said. “However, that money is also the taxes people have paid. We need to save as much of it as we can.”

This year, the competition among candidates was more heated than ever, as the number of candidates for office saw a drastic increase with the implementation of a new “one voter, eight ballots system,” in which each voter selects eight candidates for eight different positions.

Kim, however, did not use any of these methods to advertise his campaign.

“I decided to run for office six years ago to break the perception that it is necessary to spend lots of money to win in an election. It shouldn’t cost a fortune to run for a government office,” Kim explained when asked why he chose not to use the methods employed by other candidates.

“I also wanted to change the situation in which officials abandon the voters as soon as they are elected,” he said.

Although he had trouble walking due to a leg injury from a car accident in 1988, Kim personally distributed his name cards from dawn till dusk, going to even the remotest corners of the voting district.

“Campaign vehicles that shout the candidates’ names and play loud music are so noisy that most voters only find them annoying,” said Kim, who distributed a total of 32,000 name cards. “I found that talking to people face to face and explaining why I was running for office much more appealing and persuasive.”

In order to prevent people from throwing his name cards away only seconds after they received them, Kim printed the baseball schedule for the Lotte Giants, a popular home team, on the back of his name card.

After he registered as a candidate on April 12, the baseball schedule was changed several times and Kim ended up having to reprint the cards 10 different times.

Kim’s prudent election campaign went much further than his campaigning alone without campaigners or a rented vehicle.

Kim’s campaign banner was only five meters (16.4 feet) long, half the length of other candidates’ banners. His campaign pamphlet was only one page, even though election guidelines state that he could have made it as long as eight pages.

To save on personnel expenses, Kim also handled his own campaign accounting, rather than hiring a professional accountant as most candidates do.

Kim’s wife, Kim Gyeong-ok, also participated in Kim’s campaign as his campaign manager. Kim was originally not going to include his wife’s job in the tally of election expenses he submitted to the district, but after seeing how much work she was putting into the campaign, Kim decided it would only be fair to compensate her for her hard work.

“The job of district office representative is not anything huge. It’s just someone who helps and serves the people,” Kim said with a smile. “We should put an end to candidates getting elected for spending lots of money. Now that I’ve been elected, I guess there is hope.”