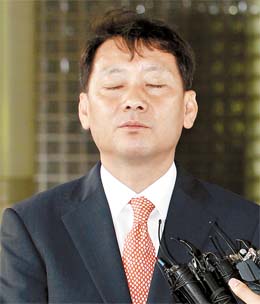 Lee Kwang-jae, Gangwon governor-elect, responds to questions from reporters yesterday at the Seoul High Court after his conviction. [YONHAP]

Gangwon Governor-elect Lee Kwang-jae received a suspended jail sentence and a big fine for taking bribes, which will prevent him from being sworn into office next month.

The Seoul High Court yesterday found Lee guilty of receiving bribes from two businessmen from 2004 to 2008, upholding a Seoul Central District Court conviction of last September. Lee, who was the right-hand man of the late former President Roh Moo-hyun, was indicted last year on charges of receiving $120,000 and 20 million won ($16,000) from a key Roh patron, Park Yeon-cha, from 2004 to 2008. He was also accused of receiving $20,000 from former Nonghyup Chairman Chung Dae-kun in 2006.

Lee, who worked as presidential secretary for information and policy monitoring in the Roh Blue House in 2003, served two terms as a Democratic Party lawmaker representing Gangwon from 2004. Lee gave up his National Assembly seat to run for Gangwon governor on the DP ticket and won the post last week despite the bribery conviction.

Lee said yesterday that he will immediately appeal the high court’s conviction. “There is no evidence, and the ruling is solely based on Park Yeon-cha’s testimony [from the lower court trial of last year],” he said.

He also criticized the court’s rejection of his request to have Park testify once more in the appeals trial.

The Local Autonomy Act requires a deputy governor to serve as acting governor until the conviction and sentence is finalized by the Supreme Court. Yesterday’s ruling will effectively suspend Lee immediately after he takes his oath of office on July 1 because he received a suspended prison term.

Under a different law, if the Supreme Court fines him more than 1 million won, Lee will lose the Gangwon governor post.

The Democratic Party also complained about the court’s handling of the trial. “The high court should have paid more attention to Lee’s request,” Woo Sang-ho, DP spokesman, said yesterday. “We want the Supreme Court to reveal the truth.”

The Democratic Party also began a legal review to file an injunction against Lee’s suspension as governor.

The party also hopes Lee’s conviction would be a campaign issue in the July 28 legislative by-elections, in which one of the vacancies is Lee’s former seat. “The Gangwon voters elected Lee as a governor even though they were aware of the pending trial,” Woo said. “They may feel angry about the latest ruling that bars Lee from performing his duties as governor, and it may work to our advantage.”