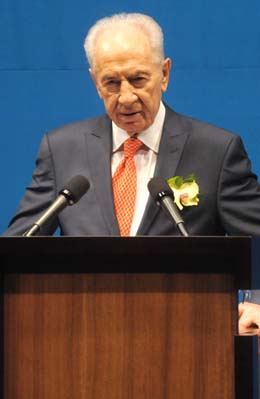 Although he dreams of peaceful coexistence between Israelis and Palestinians, and won a Nobel Peace Prize for his own efforts to reach that goal, Shimon Peres said self-defense is an issue Israel cannot ignore.

The Israeli president, in an interview with Kim Young-hie, editor-at-large of the JoongAng Ilbo, during his four-day visit to Seoul which concluded yesterday, said this explained the use of force by Israel on a foreign ship last month that resulted in the death of nine activists.

The slain activists, all Turkish, said they were bringing relief supplies to Palestinians living in the Gaza Strip quarantined by Israel, triggering international outrage.

“We didn’t go to kill them,” Peres said in the interview. “We have the right to intercept ships that may carry arms against us. When our sailors came to the ships, they started to beat them and shoot them.

“What our sailors did was self-defense,” he said

Peres said Israel does not get any pleasure from seeing Palestinians suffer from its embargo on food and other goods into Gaza. Still, he said, entering Israel’s territory without approval cannot be allowed.

Peres likened the situation to South Korea’s current conundrum, how to react to the sinking of its corvette Cheonan and the deaths of 46 sailors, allegedly by a North Korean attack.

“If somebody fires a torpedo,” Peres said, “I think you have the right to take measures necessary to defend your ship and your lands.”

The government has concluded that North Korea sunk the Cheonan and is seeking ways to hold the North responsible. In his meeting with President Lee Myung-bak on Thursday, Peres was quoted as saying that he holds the same position as South Korea.

Still, in the interview, Peres said that just as Israel employs patience with Iran, South Korea needs to have a patient approach toward North Korea. He said its dictatorship is self-destructive, and regimes run by dictators, including Iran under President Mahmoud Ahmadinejad, are destined to crumble.

Citing Samuel Huntington’s “The Clash of Civilizations,” Peres said young generations living under dictatorships will eventually stand up to their rulers.

“Their eyes are being blinded, but one man cannot blind so many people,” he said, adding that the day will come when the North becomes a democratic country.

About Kim Jong-il, Peres said, “He is not a great man. He is a great man in his own eyes.”

Peres won the Nobel Peace Prize in 1994 for a historic peace deal with Palestinians in 1993.