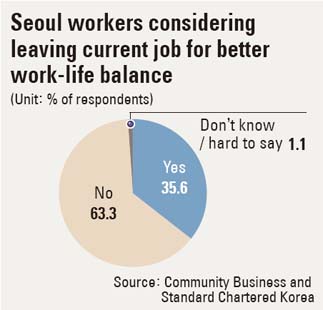 Seoulites are overworked, starved of vacation time, and one-third would consider switching jobs to better their work-life balance, according to a survey released by Standard Chartered Korea yesterday.

The survey, entitled “State of Work-Life Balance in Seoul 2010,” found that employees in the capital worked an average of 50.8 hours per week - 27 percent higher than the 40 hours recommended by the International Labor Organization (ILO).

“Employers in Korea concerned about retaining their workforce and creating productive workplaces are advised to address this issue with their employees,” said Winnie Ng of Community Business, a Hong Kong-based nonprofit organization specializing in corporate social responsibility and co-conductor of the survey with Kaist.

Another plague for Seoulites is overtime, with 63.7 percent of workers saying they work after normal hours, with 16.9 percent saying they did so “every day.”

Why so much? Answer: an excessive workload. Of the respondents, 76.2 percent said they had too much work to finish during regular business hours.

The economic downturn hasn’t helped, with 41.3 percent saying their work-life balance has worsened since the global financial crisis of 2008.

And a whopping 78.3 percent claim their current work-life balance has caused problems in their health or personal relationships in the last 12 months. Financial well-being and job security are foremost on Seoulites’ minds, with 20.8 and 17.2 percent citing them as the greatest challenges in maintaining work-life balance.

“It is very important to understand what these challenges are as these show where the employees most need support from employers,” said Ng. The top two suggested initiatives for employers to take are five-day workweeks (26.2 percent) and flexible working time (17.2 percent). Across the gender divide, more men were workaholics than women.

Men work longer hours - 52.3 hours - per week than women, who worked an average of 48.5 hours. Male workers also put in much more overtime, with 22.4 percent working overtime every day while only 7.9 percent of female employees did so.

The survey, sponsored by Standard Chartered Korea, was conducted through random telephone interviews of 1,000 full-time workers in February.