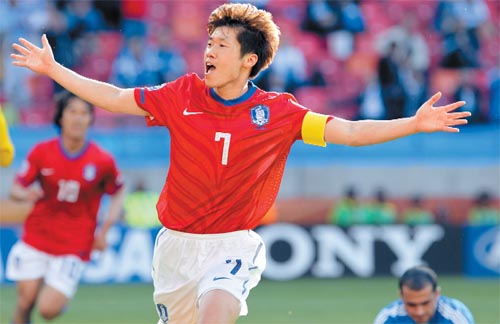 Park Ji-sung celebrates after adding a goal in the second half of the match against Greece. [YONHAP]

PORT ELIZABETH, South Africa - Korea eased to a 2-0 win over a lackluster Greece side in its first Group B match of the World Cup on Saturday.

Lee Jung-soo tapped in unmarked to open the scoring in the seventh minute at Nelson Mandela Bay Stadium, and captain Park Ji-sung doubled the lead in the 52nd with a slick solo goal.

The Manchester United midfielder collected a misplaced pass from Vasileios Torosidis and skipped past two defenders before slipping a shot across goalkeeper Alexandros Tzorvas and in at the far post.

Striker Park Chu-young had another three chances to score for South Korea and Fanis Gekas had a shot saved with 10 minutes left for what was Greece’s first clear effort.

Greece manager Otto Rehhagel stood on the touchline at the end of his team’s fourth straight World Cup finals defeat, his hands on his hips and a fierce scowl on his face.

“We really have to get our act together,” he said. “We’ve got to improve a couple of things and be brave and courageous enough.”

Korea spent much of the opening minutes giving the ball away to the former European champions and defending desperately.

But it scored from its first real chance.

Ki Sung-yueng curled in a free kick with his right foot from near the left corner flag and the ball brushed the top of Konstantinos Katsouranis’s head before reaching Lee at the far post, where the central defender easily tapped it into an unguarded net.

“You’ve got 18 people in the penalty area and there is a hard hit cross, anything can happen if the defender doesn’t head away the ball properly,” Rehhagel said.

Rehhagel took off captain Georgios Karagounis at the interval but Korea continued to dominate despite Greece’s adventurous three-man attack, and Park Ji-sung made it 2-0.

Torosidis gave the ball away to Park midway inside his own half. Park surged forward and beat two sliding tackles before coolly scoring with a low shot.

Greece mustered only a couple of blocked shots and appealed desperately for a late penalty when Gekas’s shot hit a defender. The Korean had his arms raised but replays showed the ball hit his body.

Greece tries again for its first-ever World Cup win against Nigeria on Saturday, when central defender Vangelis Moras should be fit to return from a persistent groin injury.