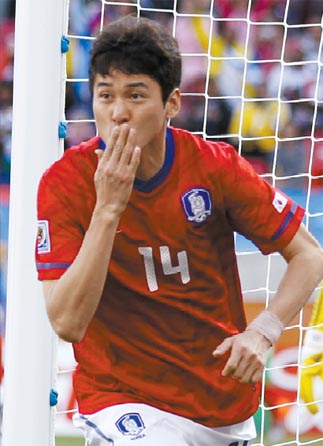 PORT ELIZABETH, South Africa - Lee Jung-soo made his World Cup debut one to remember, as he scored the opening goal only seven minutes into the game against Greece.

But when the central defender, 30, came out of the locker room for a post-match interview - limping and with his right ankle packed in ice - he had no idea he had just set a record. Told he scored the quickest goal ever by a Korean player at the World Cup, Lee smiled and said it was an “honor.”

“[Teammate] Oh Beom-seok told me yesterday that he had a feeling I would deliver a goal in the game,” Lee said. “I don’t even remember how I scored. I got the feeling that I made good contact on the free kick and next thing I knew it was a goal. I’ll never forget the moment.”

The match had only begun when Lee Young-pyo earned Korea a free kick deep in the left side of Greece’s zone, near the corner. Ki Sung-yueng took the kick, which curled past several defenders before Lee Jung-soo calmly made contact with his right foot. It was a textbook execution of a team set piece play.

Lee had earned a reputation as a goal-scoring defender in J-League. Having scored six goals for the Kyoto Purple Sanga last season, he signed on with the Kashima Antlers prior to the start of this season.

His success is even more noteworthy considering Lee played forward up until his college career at Kyung Hee University. He made the switch to defense in 2003 while with the LG Anyang Cheetahs, and began to make a name for himself as one of the brightest young defenders in Korea during spells with Incheon United and the Suwon Bluewings.

Despite his abilities on the field, it took a while for Lee to break into the national team. He was dropped from the squad for the East Asian Football Championship in July 2005 because of a hamstring injury, and was left off the 2006 World Cup squad by Dick Advocaat.

He finally made it into a regional qualifier against North Korea in March 2008, and earned praise for containing Jong Tae-se.