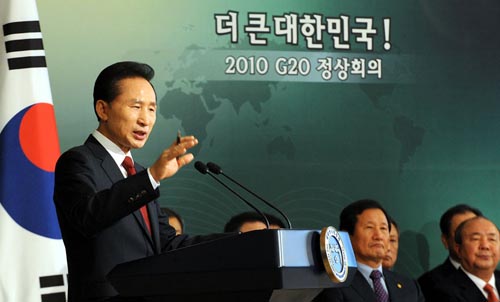 President Lee Myung-bak makes an announcement on the hosting of the 2010 G-20 Summit in Seoul last year. [Joint Press Corps]

Just a week ago, an event that boosted Koreans’ pride took place in Busan, Korea’s second largest city. As the chair country of the Group of 20 Summit this year, Korea successfully hosted the meeting of the G-20 financial ministers and central bank governors in preparation for the G-20 Summit later this year.

It is a truly astonishing event in Korea’s diplomatic history. Until now, we have tried to define our position in respect to the international economic and financial order dominated by the global powerhouses. But now, South Korea is playing a leading role in the G-20 Summit, the premier forum that will discuss the new global economic order.

Although the Busan meeting’s initial purpose was preparation for the G-20 Summit in Canada later this month, the conference naturally focused on in-depth discussions on how to handle the fiscal crisis of southern Europe. The participants agreed that fiscal soundness will be discussed at the Toronto G-20 Summit as a key issue.

About 700 dignitaries from around the world including financial ministers and central bank governors of the G-20 member economies, heads of key international organizations such as the International Monetary Fund and the Organization for Economic Cooperation and Development and 170 journalists attended the latest Busan conference.

The G-20 Summit in Seoul in November will be attended by about 10,000 guests from around the world including 30 heads of state and the world will pay attention to the event. Because uncertainty about the global economy will remain until the Seoul summit, the international community will have high expectations.

The government is currently putting forth the utmost efforts to prepare for this event in Seoul, with the Presidential Committee for the G-20 Summit at the center. The top priority, for the time being, is selecting the proper agenda for the summit and coordinating the positions of the G-20 member economies in order to bring about an agreement in the end among the leaders.

During this process, we are also trying to speak for developing countries and emerging economies that are not members of the G-20. The effort, of course, is crucial to improve the confidence and legitimacy of the G-20 process.

South Korea is the first non-G-7 country to chair the G-20. Furthermore, it is an emerging economy and a member of the OECD, and the position is the most advantageous to bridge the advanced economies with developing and emerging economies. It is likely that the world has high expectations for South Korea to play the role of linking the developing countries and advanced economies.

To this end, Seoul presented the agenda of balanced development of developing economies as well as the reinforcement of a financial safety net, a crucial issue for emerging economies. The topics have won the endorsement of all G-20 members. In addition to the agenda-setting, all government ministries also need to thoroughly prepare for the staging of the events in a smooth manner. Refining proceedings of the summit meetings, security and protocol all must been perfectly prepared.

In order for us to say that the summit was a success, all Koreans must participate and contribute. Dignitaries from around the world and the international press will visit Korea and the world’s eyes will be on Seoul. To use this opportunity to improve our politics, culture and society to a world-class level, we should all cooperate together.

*Translation by the JoongAng Daily staff.
The writer is the chairman of the Presidential Committee for the G-20 Summit.