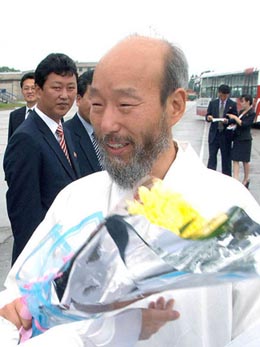 A progressive South Korean activist has traveled to Pyongyang in what appears to be the first violation of Seoul’s recent ban on exchanges with North Korea.

The North’s state-run media Korean Central News Agency reported that the Rev. Han Sang-ryeol arrived in Pyongyang on Saturday to attend the 10th anniversary ceremony of the first inter-Korean summit in 2000. An Kyong-ho, a senior North Korean official in charge of the event, greeted Han as he arrived at Pyongyang.

Shortly after his arrival, Han issued a statement saying that he risked his life to travel to Pyongyang for the two Koreas’ unification, the news report said.

Han appeared to have flown from Beijing.

The Unification Ministry said yesterday that the government had not granted Han permission to visit the North. Since May 24, all South Koreans have been barred from visiting destinations in North Korea other than Kaesong Industrial Complex and Mount Kumgang resort, as part of the South’s response to the North’s torpedo attack on the South’s warship Cheonan on March 26.

Han is the first person to have violated the ban, the ministry said, and faces punishment upon his return.

Han, 60, a well-known activist and a pastor, is a co-founder of the Korea Alliance for Progressive Movement, established in September 2007. He is one of the nation’s most famous activists, and was one of the main instigators of the anti-government protests that demanded the withdrawal of U.S. military forces from Korea.

Police investigated Han for staging violent street demonstrations without authorization two years ago after he helped organize rallies against the Lee Myung-bak administration over its decision to reopen the Korean market to U.S. beef.