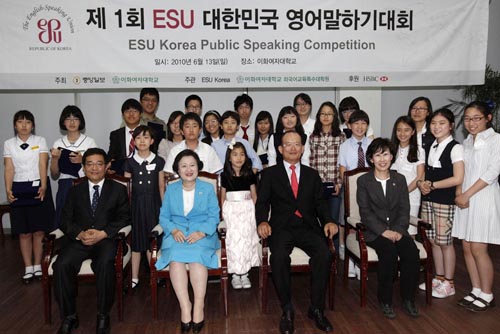 Prizewinners at the ESU-Korea Public Speaking Competition pose for a group photo yesterday at Ewha Womans University. By Jeong Chi-ho

Eighteen students made it into the finals from a pool that started with roughly 1,000 contestants.

The students were divided into three groups by academic level - elementary, middle school and high school - and given five minutes to speak about “Speculation on Our Future.”

The speeches were followed by a one-minute evaluation with brief questions from the judges and other competitors.

Professors from Ewha Womans University and the dean of Ewha’s Graduate School of Teaching Foreign Languages made up the small group of judges.

The students chose to speculate on topics ranging from the recent sinking of the Navy corvette Cheonan to the detrimental effects human beings have on the environment.

Jung, who placed first in the high-school division, will be given a chance to participate in the ESU international debate, which will take place in May 2011 in the United Kingdom. Another student will be selected from a second tournament in Korea during the latter half of the year to accompany Jung.

The competition was hosted by the JoongAng Daily, JoongAng Ilbo and Ewha Womans University.

Further information from the competition as well as interviews with the grand prize winners will be featured in JoongAng Daily’s education page on June 18.