Nothing could dampen spirits of Red Devils

Nothing could dampen spirits of Red Devils 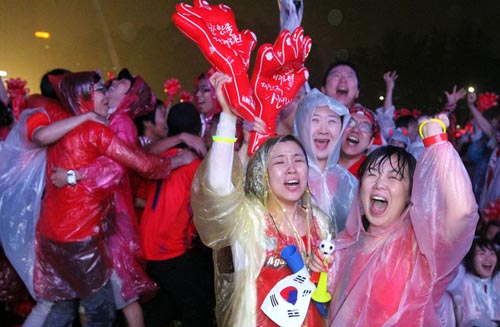 Police estimated that around 47,000 Red Devils packed the grounds of Seoul Plaza - beginning in the gray drizzle at 3 p.m. - and another 200,000 people visited 45 different cheering areas around the city.

But the noise was loudest around Seoul Plaza, the must-go spot for die-hard fans.

“I heard many people were planning on going to COEX in southern Seoul for cheering this time. But I think no place could beat Seoul Plaza for the best cheering experience,” said 18-year-old Kim Eun-ji, who arrived early enough to grab a seat right in front of the screen.

Three mammoth screens were set up at different angles in the square to give the maximum number of spectators a good view of the match.

The decibel level started to rise as soon as M.C. Kim Han-suk took the microphone, and soon the crowd was singing the team songs they’ve had memorized since 2002 (a new song written for this year’s Cup had far fewer people chanting along).

As the game went into the second half with Korea ahead, the screaming got louder.

“I knew Park Ji-sung would make a history. He is a victory maker!” said 45-year-old Kim Yong-doo as he watched the team captain drive a goal into the net.

Even some expats got caught up in the full force of Korea’s cheering culture.

“It’s my first time going out to cheer for Korea, and I’m very excited because I’ve seen pictures of Koreans cheering in previous World Cups. Even though it’s raining today, I wanted to be at the first game,” said David Wescott, an English teacher from the United States.

“It’s wonderful to be in a country that’s so passionate about soccer,” added Chris Foss, who also came out in the storm to cheer for Korean team in 2006.

“Here I can cheer for the team as crazily as I want and still avoid getting wet. Because I wanted to come out with my children, having assigned seats were a major factor that made me decide to come here,” said Min Jae-du, who was with his wife and their two small children.

Although a plan to set up an outdoor screen in front of the stadium was cancelled because of the heavy rain, the weather made no difference to the frenzied fans.

“I consider the raindrops I get on my shoulder the sweat from players from South Africa,” said 25-year-old Ryu Hyun-ji.

The weather, in fact, was no drawback for people sporting new and eye-catching fashions to support their team. Many fans sported red rain coats, and others decorated red umbrellas with plastic devils’ horns or a soccer ball spirals. And to keep their face-paintings from being washed away by the rain, many came prepared to cover up with Korean flags.

*Interns Ginny Kim and Angela Park contributed to this article.