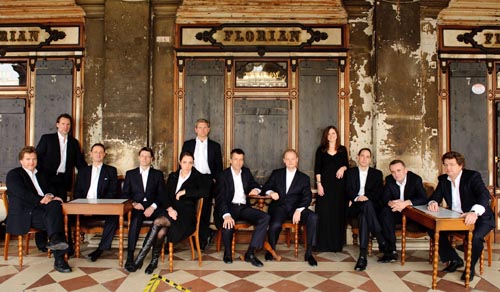 The 12 Cellists will play two different programs in concerts on July 1 and 2 at the Seoul Arts Center in southern Seoul. Provided by MBC

Die 12 Cellisten der Berliner Philharmoniker, or The 12 Cellists of the Berlin Philharmonic, an ensemble of cellists from the world-renowned orchestra, will return to Seoul for their seventh recital here July 1-2.

The ensemble, noted for its dynamic harmonies, won hearty applause from Korean audiences in a concert appearance during the 2002 World Cup, when the entire group appeared wearing Red Devils T-shirts. Concertgoers were also appreciative when the ensemble played “Castle of Magic,” a beloved K-pop song, in its latest concert here in 2008.

The 12 Cellists made their first visit here in 1996 and have toured Asia with a stop in Korea every two years since 2000.

This time, the ensemble is to perform a range of pieces in genres from baroque to tango, chanson and modern music. The two concerts will each have a different program. On the first day, the concert will be divided into two parts: “Angels” and “Cello Animation.” In the former, they will play French composer Francis Poulenc’s “Figure Humaine,” followed by Astor Piazzolla’s “Angel” series. They will also play songs from movie soundtracks such as “Tea for Two” from “No, No, Nanette” and “As Time Goes By” from “Casablanca.”

The second concert will start with Bach’s “Die Kunst der Fuge. BWV 1080 No. 1” in a program called “Canto di Forza” or “Poem of Power,” the name of an organ piece by Latvian composer Peteris Vasks. After the intermission, the 12 Cellists will play works by French composers such as Henri Bourtayre, Maurice Ravel and Gabriel Faure.

The group was founded in 1972 by Rudolf Weinsheimer, who was a member of the Berlin Philharmonic from 1956 until 1996.

In a recent e-mail interview with the JoongAng Daily, Ludwig Quandt, the ensemble’s first solo cellist, talked about the 12 Cellists’ appreciation of Korean audiences and the process he went through to select music for the upcoming concerts in Seoul.

A. We love to be here. The people always have been so active and vivid. Many of the listeners are young and absolutely emphatic about music. I wish it were the same in my country. Seoul seems to me like the people are hardworking but enjoying life.

How many members of the ensemble were here for your previous concert in Seoul?

Why did the 12 Cellists previously consist only of male members?

The 12 Cellists are the cello section of our orchestra, the Berlin Philharmonic. Every member entering the orchestra is also a member of the 12 Cellists. It is the decision of the whole orchestra who gets the job, and in the audition we have to take the best musician, regardless of whether the person is male or female. In the auditions after 1982 (the first year that women could enter our “male orchestra”) there was always a male winning the competition. In the last two auditions two women were the best.

What has changed since you added female members?

The response to the audition is positive, many have been waiting for decades for a female member.

Members of the ensemble are known to have a variety of careers outside the ensemble, such as furniture designer, snowboard instructor and magician. Does that influence the music in a positive way?

We have all studied the cello for many years. But being a good musician also means having other interests and skills away from the instrument. Music tells about life. Exploring life without the cello helps make music.

You have chosen different programs for the two-day concert. How do you decide which pieces to play? What is the process like?

It is me who has to decide. Sometimes it is hard to find a good program. In Seoul we need two different programs because we hope there are some people who want to listen to both concerts.

Of course we discuss the programming, but normally the other members are happy with my programs.