At this school, kids of all races fit in

At this school, kids of all races fit in 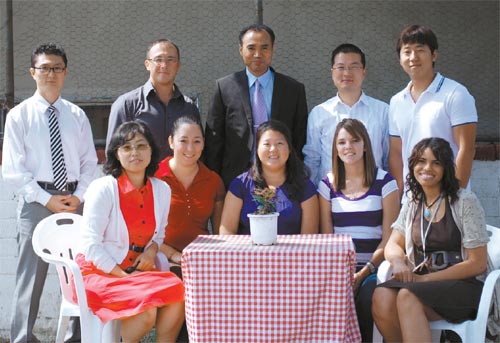 James Kang-McCann, principal and founder of the Amerasian Christian Academy, back row center, poses with teachers from the school, which is located in Dongducheon, two blocks from Camp Casey. Provided by the academy

Its student body is like a small global village. More than 110 students with parents from 13 countries gather daily to study math, reading, science and social studies in English. They are the children of migrant workers, the children of women who came to Korea to marry, the children of Korean women and American servicemen. Eighty percent don’t have biological fathers at their homes, and some travel as much as two and a half hours a day to get to school.

In an interview last Thursday morning at the school, founder and Principal James Kang-McCann said he encourages children to stay in Korean schools if they plan to live here long-term. For those who can’t, the academy offers a cozy haven in a culture that sometimes still emphasizes pure bloodlines.

“A lot of students have anger and fear, a lot of hurts and pains,” he said. “It’s part of our ministry to deal with those kinds of things.”

The son of an African-American father and Korean mother, Kang-McCann spent 12 years in Korea, where he was the only black Amerasian child in a school of 3,000 students. Memories of the teasing he endured brought him back in 1990 to find out if Amerasian children were still going through what he did as a child. They were then, and still are today, although the intensity of discrimination is weaker now.

Kang-McCann said in the 1970s, it was everywhere with nothing to challenge it. Today, teasing and bullying take place at the individual level, he said. Some mixed-race children fit in, while others don’t.

Schools with high academics tend to be easier places for mixed children to be, he said. Individual academic ability also helps, as does a stable home environment. Skin color matters, too.

Kang-McCann said children of mixed-Korean heritage will succeed more easily if they speak both English and Korean.

Koreans respect fluent English speakers, he said, and prefer to hear the language from someone who looks foreign.

“I’m trying to teach my students, ‘Let’s use your appearance in a positive way,’” he said. “’With your appearance, speaking in English is always positive.’”

Having a job Koreans traditionally respect, such as teaching or working for a leading company, also leads to greater acceptance, he said.

Kang-McCann said ideally, Korean schools would teach mixed-race and foreign children to speak Korean, much like the ESL programs for immigrant children in the United States.

“As the language develops, their other areas of academics will develop, too,” he said.

More importantly, Korean schools are a place to talk about race and the way it has shaped Korean society.

“In Europe and the U.S., we went through all of that,” he said. “I’m not saying we don’t have any problem, but we are aware of it and very sensitive about it.”

Kang-McCann said textbooks should tell the history of Amerasians in the context of the Korean War and the poverty that followed. Working on an American base was a good way to make a living then, and that led to unions between American servicemen and Korean women.

They should also explain why so many Korean men seek brides from overseas, he said.

But until that happens, the Amerasian Christian Academy will keep providing a place for mixed and foreign children in Korea.

It gets by with volunteer teachers from the United States, scholarships, tuition payments and the support of churches and civic groups.

Kang-McCann said while all full-time teachers must be Christian, students of all religions are welcome.

“Many of our students come because this is the only option they have,” he said. “So we are very sensitive. We respect all religions.”