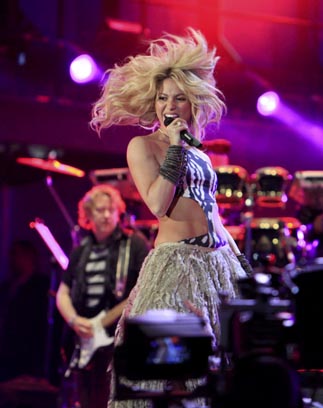 Shakira performs during the opening concert for the 2010 World Cup at the Orlando Stadium in Soweto, Johannesburg, Thursday. [REUTERS/YONHAP]

The Cameroonian band Zangalewa has gained a new lease on life after years in obscurity now that one of its old hits has inspired “Waka Waka,” the official song of the World Cup, performed by Shakira.

“The reprise of our song ‘Zangalewa’ by Shakira has enabled us to come out of the solitude of retirement,” said group leader Jean Paul Ze Bella. “It has enabled us to get together again and to get down to work.”

“I was in my plantation at the village when I got a telephone call to tell me the news. I couldn’t get over it! Thanks to Shakira,” Ze Bella enthused in both a warm and proud tribute to the Colombian star.

At the beginning of May, the world football governing body FIFA announced jointly with Sony records that it had chosen “Waka Waka (This Time For Africa)” as the official song of the World Cup, co-produced and sung by Shakira, accompanied by the South African pop group Freshlyground. They performed the song to a worldwide audience at a concert Thursday.

“The refrain is based on a Cameroonian song,” FIFA stated.

The Zangalewa band and the producers of “Waka Waka” reached an agreement, according to the Cameroonian group’s manager, Didier Edo, who added that they “weren’t badly done by” in the settlement.

Neither party would give further details of the financial accord.

Members of Zangalewa, who have not played together in more than a year, began to rehearse June 1 and are today talking about a possible international tour and a “best of” album.

“Negotiations [with international show producers] are under way,” said Edo, who added that the group would like to give “a series of shows during the time of the World Cup,” which takes place in South Africa from June 11 to July 11.

Zangalewa won renown in Africa and the African diaspora in the mid-1990s, with a hit single of the same name, written years earlier.

“Zangalewa” was composed in the early 1980s by three members of the presidential guard. It comprises onomatopoeia drawing on the slang of the Cameroonian sharpshooters. The expression comes from Zanga-lowa which means “Who called you up?” in the Ewondo language, explained Ze Bella, who wrote the song with Guy Dooh and Emile Kojidie.

“The song was written to give some spirit to a young soldier in difficult times,” he added.

Zangalewa is defined by its founders as a breakaway group of the orchestra of the Presidential Guard, which was created “to produce healthy and festive music,” its leader says.

For his part, Edo is grateful to see Zangalewa enter the history books.

“It’s a historical fact that a Cameroonian group inspired the official song of the first World Cup to be played in Africa.”