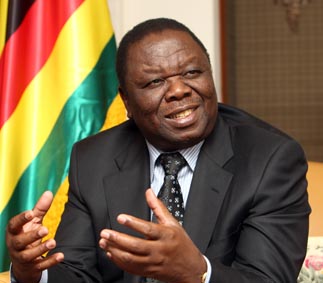 Zimbabwean Prime Minister Morgan Tsvangirai visited Seoul at the invitation of Korean Prime Minister Chung Un-chan, from May 24 to 26, and the two prime ministers signed an investment protection agreement in an effort to improve bilateral relations, which were first forged between the two countries in 1994.

Tsvangirai was born in 1952 as the son of a bricklayer and the eldest of nine children. After graduating from high school, he began working at a nickel mine to help support his family. He later became involved in a labor union and his experience there helped him enter politics in 1980.

In the first round of the 2008 presidential election, Tsvangirai was ahead of Mugabe by just under five percent, but before a runoff could be held Tsvangirai withdrew his candidacy in protest against what he said was intimidation and violence by Mugabe’s supporters against the members of his party.

In an interview with the JoongAng Ilbo on May 25, Tsvangirai said the current coalition government is not perfect but Zimbabwe is at least off to a good start in sustaining stability in the economy, finance and politics.

Q. What is your evaluation of the coalition government with President Mugabe?

A. It’s not perfect. I had to make a choice for the sake of my country. But I want to say that there has been some progress. Economic sanctions by Western countries have been lifted and Zimbabwe is gaining political stability with the launch of the coalition government. The economic crisis is now on the track to recovery and inflation, which once shot up to 200 million percent, is almost stable.

What has been the outcome of your visit to Seoul?

It was a occasion to upgrade relations with South Korea.

I’m certain that both the Zimbabwean government and South Korean companies can work together to carve out a future based on the principle of reciprocity in the field of Zimbabwe’s telecommunications, roads and mineral resources.

Zimbabwe has forged diplomatic ties with both Koreas. What is your opinion of the sinking of the South Korean Navy vessel the Cheonan?

It’s a very unfortunate tragedy. I would like to deliver my condolences to the fallen Navy officers, their families and to all South Koreans. Zimbabwe has maintained diplomatic ties with North Korea since the two sides forged relations in 1980 so we’re not in a position to choose between South and North Korea. One thing I want to emphasize is that we very much want peace on the Korean Peninsula.