Turning the weapons of war into tools of life

Turning the weapons of war into tools of life 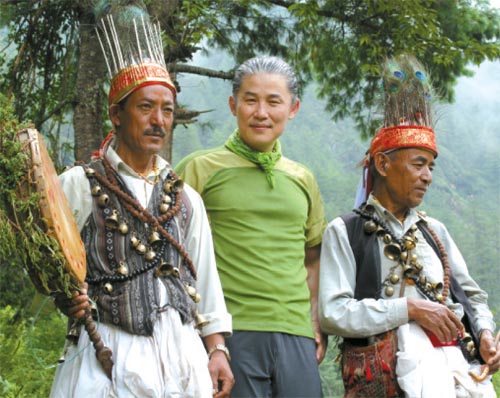 Collector Shin Young-soo poses with shamans during a visit to Nepal last August.


To commemorate the 60th anniversary of the Korean War, Shin Young-soo decided to hold a special exhibition. The director of Gallery Tea in Insa-dong, central Seoul, is the brain behind “War and Everyday Life,” a collection of artifacts from the lives of war refugees that will run until Sunday.

The exhibition focuses on how those fleeing the war cobbled together necessities even under the worst conditions, offering a new level of emotional connection. Around 300 items are on display, collected in the early 1990s from countries including Korea, the United States and China.

“This exhibition makes the war generation feel nostalgia for old times,” said director Shin. “In contrast, many of the postwar generations don’t even realize the Korean War happened on our peninsula, and how poor we used to be.”

Shin added he hopes many young people will use this chance to learn more about their immediate ancestors.

The artifacts on display are mainly recycled military gear. A helmet made of fiber attached to the end of a long wooden stick was used to scoop human excrement out of pit toilets. The flat top part of a military drum was torn off and used as a traffic sign, painted blue and white. Steel Coca-Cola cans and an empty hand grenade were reborn as the frame of a desk lamp. 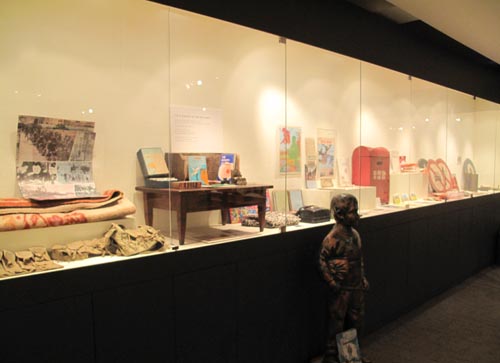 North Korean propaganda is part of a display at Shin’s Gallery Tea. Provided by Shin Young-soo

Telephone wire, also known as bbi-bbi wire, was used to weave a big basket or a vegetable drying rack. A rusty dustpan was made out of a plastic oil tank cut in half. A lid to the tank shows that the dustpan is in fact a recycled item as well. A bat-shaped grenade used by the Chinese Army became part of a mortar and pestle, with a half-broken round-shaped grenade. This set of grenades was used to crush garlic and grind sesame seeds.

“The grenade set is my favorite artifact out of the many items in this exhibition,” said Shin. “I think it is the most brilliant recycled item of all.”

It is strange and wonderful that items made to kill were transformed so ingeniously into tools - even medical equipment. The empty cartridge of a bullet was used by one acupuncturist as a container to carry needles.

The other side of the gallery contains postwar items. North Korean propaganda leaflets are lined up next to the notebooks that were awarded to students who found the leaflets and reported them to the police. “It was considered a great honor to receive one of these notebooks,” said Shin.

Asked why he started collecting these objects, Shin replied, “Everyday life doesn’t stop even during wartime. Besides, I wanted to show that maybe being in an uncontrollable and extreme situation like the Korean War motivated a stronger desire for life.”

Shin runs many other small galleries and museums as well. He talked about his passion and interests in an interview.

Q. When and how did you start collecting artifacts? 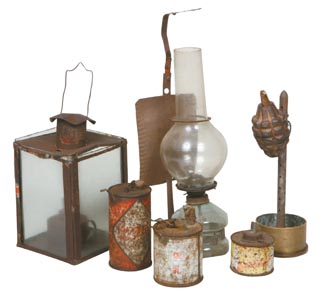 These lamps were made from a variety of recycled products, from Coca-Cola cans to hand grenades. Provided by Shin Young-soo

A. I always liked to travel. The first trip I took by myself was back in high school. I carried a military sleeping bag out and just started walking. As I traveled, I found many different items that had a unique regional character. But local people never gave serious thought to preserving them because they were all around them. I thought it would be worthwhile to bring those artifacts to places where they are rare.

What artifacts are you interested in and what’s your plan for those artifacts?

Frankly, I stopped collecting Korean artifacts back in the early ’90s. After I had been to various museums and galleries in each province in Korea, I realized that so many people have already tried their hands at what I dreamed of doing: collecting artifacts and opening a modern [Korean] history museum. I thought I needed to do something no one has done yet. So I looked to the under-explored countries such as Tibet, Nepal and Mongolia. Ever since the middle of the 1990s, I’ve collected artifacts from those countries. The artifacts I collect sometimes cost more than accessories from luxury brands. But I think paying for these artifacts is much more worthwhile and needed. Without collectors like me, precious artifacts that cannot be reproduced by later generations will disappear and never be recognized. With the artifacts I get from various countries, I’ve opened up cultural museums such as the Silk Road Museum and Tibet Museum, which was recently relocated.

What were the reasons for relocating the museum? 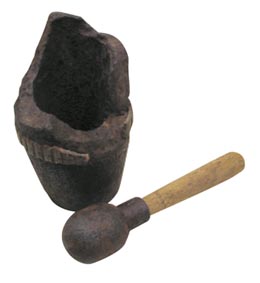 Below: A mortar and pestle made from two grenade casings. Provided by Shin Young-soo

Since the Tibet Museum opened up in 2000, it had been in Samcheong-dong, but it was relocated and reopened in Nusang-dong right under Mount Inwang in central Seoul. Samcheong-dong, where culture enthusiasts once went to start their own galleries or museums, has been commercialized too much in the past two years. Too many people crowd the narrow streets, and newly opened shoe stores and coffee shops take up space. So Samcheong-dong has been losing its charm for me. That was the main reason.

Second, Koreans are not familiar with paying an entrance fee for exhibitions in small galleries. Almost half the people who walked into the museum left as soon as they found out there was a price to pay to check out this relatively small place compared to large national museums. When there was a boom in Tibetan culture back in 2001, around 150 people visited the museum every weekend. Most of them came to experience the country before their trip to Tibet, since I have many Tibetan religious artifacts. But now not even 30 people come visit on weekends. So I use the place as a lab where I can research and have discussions with other scholars interested in the culture. I recently decided to lend the artifacts for specialized exhibitions hosted by Sookmyung Women’s University and Posco. I’ve also donated more than 2,000 items to national museums so far. If people don’t come to see these artifacts, I’ll make a way for them to appreciate the things I’m passionate about.

Below left, military telephone wire was used to weave baskets, while below right, an oil tank was transformed into a dustpan. Provided by Shin Young-soo

Something that looks not so special today can have value in the future, as can be seen from the exhibition you are now holding. What would you collect that is abundant today to show future generations in 2100?

Clothing. I’m extremely interested in everyday clothes such as shirts, dresses, hats, furs, leather goods. But it is extremely hard and expensive for a small collector like me to keep clothing in good condition. Since people wear the same Western-style clothing worldwide, local traditional garments are easily forgotten if there’s no effort to preserve them. Especially traditional Tibetan clothing is often woven with a furry texture, and leather goods need controlled temperature and humidity to stay in their best condition.

Tibetans still have some practical problems to take care of. In my opinion, they don’t have enough time to worry about keeping their traditions. They have to worry about where to get food today and tomorrow. To them, it is much better to buy made-in-China shoes and shirts for a dollar or two instead of making traditional garments, which takes about a month. Especially furs and leather goods are disappearing fast. Korea is now considered a developed country, and as a result it has been working to restore and preserve its own traditions since the mid-’90s. And I think it’s been successful. Hence, I think it’s my responsibility to help other developing nations preserve traditional artifacts. Furthermore, I can use these artifacts to show later generations that even if different nations wear the same clothing nowadays, each used to have its own unique fashion sense back in the day.