Celtics bring Lakers to edge of elimination in finals

Celtics bring Lakers to edge of elimination in finals 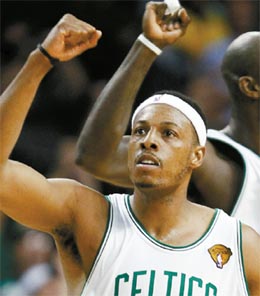 BOSTON - Paul Pierce scored 27 points and Kevin Garnett had 18 with 10 rebounds as the Boston Celtics beat Los Angeles 92-86 Sunday to put the reigning champion Lakers on the brink of elimination in the NBA Finals.

Rajon Rondo had 18 points and eight assists for the Celtics, who defended their home court for the second straight game to take a 3-2 lead in the best-of-seven championship series.

Pierce shot 12-of-21 from the field as Boston put on a shooting clinic in front of a crowd of 18,624, hitting 56.3 percent from the field to move within one victory of capturing their second championship in three years.

“This is a tough mental group,” Pierce said. “As the series goes on we are finding things we can do.

The series now shifts back to California, where the Celtics will try to win their NBA-leading 18th title in franchise history with a victory in game six tonight at Staples Center arena. A game seven would also be in Los Angeles.

Kobe Bryant did his best to rally the troops, scoring 19 of his game-high 38 points in the third quarter for the Lakers, who became the first team in the series to lose two games in a row.

Spain’s Pau Gasol finished with 12 points and 12 rebounds for the Lakers, who are not only vying for back-to-back titles but seeking a measure of revenge after losing to the Celtics in the finals two years ago. Bryant didn’t get much help from his teammates as the Lakers shot just 39.7 percent from the field.

Boston had already set the tone early. The Celtics came out quickly, scoring the opening 6 points of the game before taking a 22-20 lead at the end of the first.

Pierce scored 8 points in the first quarter and continued his hot hand in the second with 7 more. The Celtics bench, which was so crucial in game four, also chipped in Sunday as the Celtics built a six-point lead at the half, 45-39.

The Lakers seemed to have no answer for Los Angeles native Pierce, who boldly predicted last week that the series would end early and the teams wouldn’t be heading back to the west coast for a game six. While his prediction didn’t come true, Pierce did his best to make sure his Celtics at least went back to Los Angeles with a series lead.

“We knew Kobe would come out aggressive and we did a good job of making him make tough shots,” Pierce said.

Game four was the most physical contest in the series and some of that aggression carried over to game five. Late in the second quarter Rondo was slapped with a technical foul for giving Laker Ron Artest a one-arm shove under the Lakers basket that made Artest wobble.