Pigs on the playing field

Pigs on the playing field 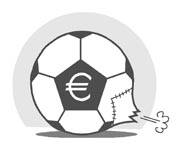 The hairstyle known as the Manchurian queue is often called a “pigtail.” A Manchurian man would shave off the hair on the front of his head every 10 days and braid the rest of the hair into a long pigtail. The shape of this hairstyle gave it its porcine nickname. When the Manchu conquered Beijing in 1644, the first thing they demanded of the conquered, the Han Chinese, was that they wear their hair this way. They said: “Those who try to save their hair will lose their heads.” It became a symbol of surrender and obedience for this minority group of 1 million to make such demands of the majority Han, which had a population 100 times larger. The Manchu broke the Han people’s spirit through vicious oppression and they continued to build a vast empire until the revolution in 1911.

Today, it is difficult for a minority group to rule the majority. The venue for this year’s World Cup games, South Africa, is marred by its history of apartheid. Shunned by the rest of humanity, the white government became a pariah in international society before disappearing into history like the madness of Adolf Hitler.

Nowadays, the only way a racial minority can overwhelm the majority is in the field of sports. This is particularly true of the World Cup. The populous nation of China, with 1.3 billion people, advanced to the World Cup finals only once, in 2002. China only had a chance to get to the finals when it wasn’t competing with Korea and Japan, because as the hosts the two nations automatically qualified. India, a nation of 1.2 billion people, also has no real history in the World Cup, nor has it had much luck with medals in the Olympics, winning its first gold medal in 28 years at the 2008 Beijing Olympic Games. This is strange, considering that Qatar, with only one-tenth of India’s population, has qualified for the World Cup finals in the past.

This does not mean that the size of a nation’s population or its economy does not have an influence on a nation’s football standing. When World Cup season rolls around, financiers often make predictions of victory based not only on the team and its players but also on the population, economy and stock prices of the participating nations. Goldman Sachs and UBS have already predicted that Brazil, a winner in this global recession, will also win the World Cup.

The nation that Korea beat 2-0 in this World Cup is Greece, the origin of the current European financial crisis. Greece is one of the PIGS (Portugal, Italy, Greece, Spain), the four nations that were hit hardest with the crisis. Goldman Sachs predicts South Korea has a 0.76 percent chance of winning the World Cup. For Greece, it is 1.84 percent. Perhaps Korea’s victory over Greece was partially related to its resilience in this recession. There is no way to prove whether a financial crisis influences a nation’s standing in football but it makes sense that we were reminded of the PIGS as we watched the listless Greek players roll around the field Saturday night.