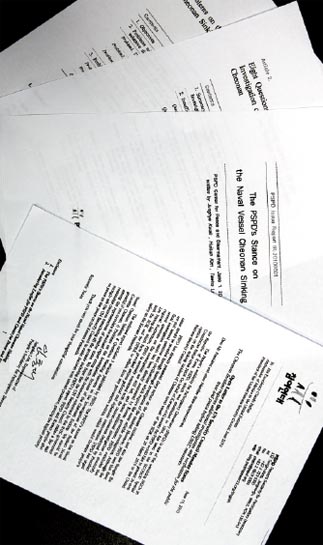 A copy of the letter and report sent to the UN Security Council. [JoongAng Ilbo]

A local civic group has submitted a letter raising suspicions about the cause of the Cheonan sinking to the UN Security Council, throwing a spanner into Seoul’s diplomatic efforts to draw international censure upon Pyongyang for the attack.

The move by the People’s Solidarity for Participatory Democracy (PSPD), one of South Korea’s oldest and best-known civic groups, comes as Seoul diplomats grapple to gain support from China and Russia - key members of the Security Council and North Korea’s allies - for an official reprimand at the United Nations level, whether by resolution or less-binding presidential statement.

Experts and officials from South Korea’s investigative team were expected to brief the Security Council at 3 p.m. yesterday New York time on the evidence they had collected to prove that Pyongyang was behind the March 26 attack on the South Korean warship, which left 46 sailors dead. That briefing was to be followed by a second from North Korean officials to rebut the South’s claim.

The PSPD said in its June 10 letter that Seoul’s final report had “many loopholes” and “lacks convincing rationale.”

“The evidence of a torpedo attack proposed by the JIG [Joint Investigative Group] lacks convincing rationale and the same goes for the explanation over the infiltration of a North Korean submarine,” the Seoul-based liberal civic group said in its letter.

The group submitted a report with its letter that laid out “eight questions needing answers” by the government, raising issues including the lack of injuries on the bodies of survivors and victims that would indicate a torpedo attack and lack of evidence showing the attack came from the North.

The PSPD urged the Security Council to make “a fair and reasonable decision considering all the grounds,” including the group’s report.

“PSPD is seriously concerned with the countermeasures deployed by President Lee Myung-bak, which have provoked serious political and diplomatic controversies,” the letter said.

The move drew intense criticism from the South Korean government, which has engaged in a delicate diplomatic dance to persuade UN Security Council members to take action against Pyongyang. They said the civic group’s argument may offer China and Russia a good excuse to take no action.

“This is hampering the government’s diplomatic efforts and is very regrettable,” South Korean Foreign Ministry spokesman Kim Young-sun said yesterday. “Our government is trying to deal with the issue in a calm yet resolute manner based on a belief that the truth will tell everything.”

“I wonder which country these people [the PSPD] belong to,” he said yesterday.

But Lee Tae-ho, a senior official at the PSPD, said a civic group communicating its opinions to an international group is a “common method of communication among global NGOs.”

Seoul, after a monthlong multilateral investigation, last month concluded that Cheonan was sunk by a North Korean torpedo attack. Pyongyang has vehemently denied the allegation, leading to heightened inter-Korea political and diplomatic tensions.

The two countries’ consecutive briefings at the UN headquarters in New York are expected to set the tone of debates within the Security Council about what action to take. Seoul wants the council to address the attack in as strong terms as possible.

Experts and military officials from South Korea, along with experts from the five countries that took part in the investigation, will present their evidence to the UN Security Council. China and Russia, whose attendance at the meeting had long been uncertain, agreed to show up to hear Seoul’s side of the argument, according to Kim.

“The meeting will likely take two to three hours, followed by Q. and A. sessions, and subsequently the briefing by North Korea,” said Kim.

Neither Korea will be allowed to attend the briefing by the other. It is not known yet which Pyongyang official will lead the North’s briefing.

Even with the double briefings, it remains unclear whether the Security Council will be able to reach its own conclusions anytime soon.

Because many of the ambassadors among the council’s 15 member countries will be away for a week beginning Saturday to visit Afghanistan, the council’s stance, if not determined by the end of this week, will likely be deferred until July.