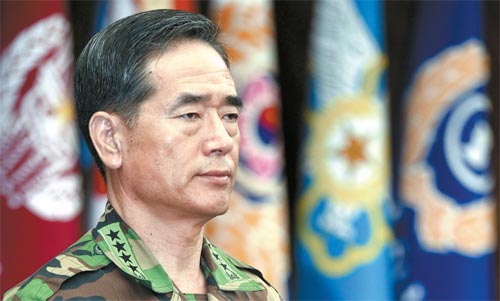 Gen. Lee Sang-eui, outgoing chairman of the Joint Chiefs of Staff, wears a stern expression yesterday at the Defense Ministry office. Lee tendered his application for retirement on Sunday. [YONHAP]


South Korea’s top military commander has submitted an application for retirement after a state audit agency blamed military leadership - including him - for mishandling the response to the Cheonan disaster.

Gen. Lee Sang-eui, the chairman of Joint Chiefs of Staff, said he will fight to reveal “the truth” even after retirement, and yesterday filed a defamation suit against a local newspaper that reported that he filed fabricated documents to cover up his dereliction of duty.

The Defense Ministry said that Lee submitted his request for discharge late on Sunday. As chairman of Joint Chiefs of Staff, Lee, a four-star general, is the second in command only to the defense minister.

Lee’s action, while taking responsibility for the March 26 sinking that saw the deaths of 46 South Korean sailors, also challenges the Board of Audit and Inspection’s review of the military response.

In its review released last Thursday, the BAI said that the Joint Chiefs of Staff were only belatedly informed by the Second Fleet that the ship had been attacked, and that they distorted some information - including the timing of the incident - when they reported to the Defense Ministry and the media.

The BAI said that resulted in a failure to alert the military to assume combat readiness.

“We sincerely accept some of the Board of Audit and Inspection’s conclusions that point out the mistakes of the military, but some contents in the review are inconsistent with the facts and have led the military to be perceived as an immoral group that indulged in lies and fabrications,” Lee said in the letter.

“That has disgraced the military and the individuals who serve it and has seriously lowered military morale.”

Yesterday, Lee visited reporters at the Defense Ministry and said he did not order the falsification of any reports to the ministry and the media.

He said he has evidence to prove his innocence, but did not specify what that was.

Lee said he has filed a libel suit against the Dong-A Ilbo, which last Friday cited an unnamed BAI official as saying that Lee was drunk at a party when the Joint Chiefs of Staff received the first report on the Cheonan, and that Lee later fabricated documents to make it look like he was on duty.

Lee was supposed to be in the command room on the night the Cheonan sank. He said that although he took a three-hour break in his office during the night, the office was full of communication equipment and he could have been reached at any time, and he remained on duty.

“I will sternly deal with this [fabrication] issue even after I am discharged,” he told reporters.

The Defense Ministry said that while it disagrees with some of the contents of the BAI review, it will have no official response to its conclusions.