Life in the city, to be taken in slowly

Life in the city, to be taken in slowly 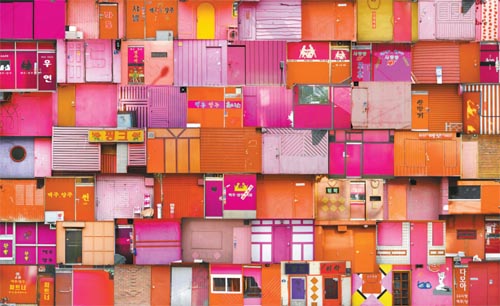 “Arcades Project” at Interalia Art Space in Samseong-dong, southern Seoul, features the works of 10 contemporary Korean artists. Jang Suk-joon’s photograph, above, looks like a brilliantly-colored tapestry from a distance, but upon closer inspection is a collage of images of the gates and walls of dilapidated stores, bars and brothels from around the country.


“Arcades Project” was German philosopher Walter Benjamin’s (1892-1940) unfinished writings about life in Paris in the 19th century. It is also the title of the exhibition going on at Interalia Art Space in Samseong-dong, southern Seoul. The show features 10 Korean contemporary artists whose works carry their unique interpretations of city life.

Kim Mi-ryoung, senior curator of Interalia, explained that the exhibition was inspired by Benjamin’s writings, which focused on how arcades, passages of glass and iron that appear between rows of stores, changed the way people lived.

“According to Benjamin, arcades were good habitats for people who walked slowly to see and experience the city,” Kim said. “We have arranged the exhibition hall like arcades, so that viewers can stroll between the works and see the various aspects of city life represented by the artists.” 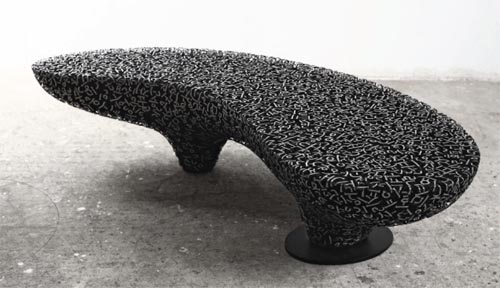 Lee Jae-hyo’s furniture-like sculpture is made of nails. Provided by the gallery

One such passage in the center of the exhibition hall leads to an installation titled “Seoul Station - Time Apparatus” by Kim Hee-seon. The installation is a projection of a big clock in which busy pedestrians are reflected. The clock was modeled after the one that hangs on the facade of the old Seoul Station building in central Seoul, according to the gallery.

“Since 1925, the clock has never stopped, except for periods during the Korean War,” said Lee Sang-mi, manager of public relations at Interalia. “The work tells us the story of our past, present and future, which the clock has seen and will see.”

The walls along the passage exhibit paintings by Jeong Jin-yong. The paintings depict famous structures in various cities in materials such as Korean ink, gold powder and tiny crystal beads.

There are rooms for the sculptors Lee Jae-hyo and Bahk Seon-ghi off of the two walls along the passage, just like stores branching off of an arcade. Lee’s works are furniture-like sculptures made of pine and nails.

Among Bahk’s works are reliefs the create optical illusions. They look like fully three-dimensional objects at a distance but in reality are almost flat reliefs.

In another section, three artists - Lee Sang-won, Lee Yu-woon and Jang Suk-joon - show the somewhat gloomy aspects of cities through works of photography and painting.

Among them, Jang’s brilliantly-colored photos look pretty at a distance. Up close, however, they are actually the gates and walls of dilapidated stores, bars and brothels from around the country.

In a separate section, there are works by Kang Yu-jin and Park Sang-hee that show scenes of metropolitan cities reconstituted with unique perspectives (Kang) and materials (Park). And Han Sung-pil’s photos, displayed in another section, show walls from European cities that are covered with trompe-l’oeil paintings, raising questions about the barriers between illusion and reality.